Barcelona unable to find their stride in Champions League

The team’s other players couldn’t do enough help Barcelona advance then, and this time Messi had even less support. 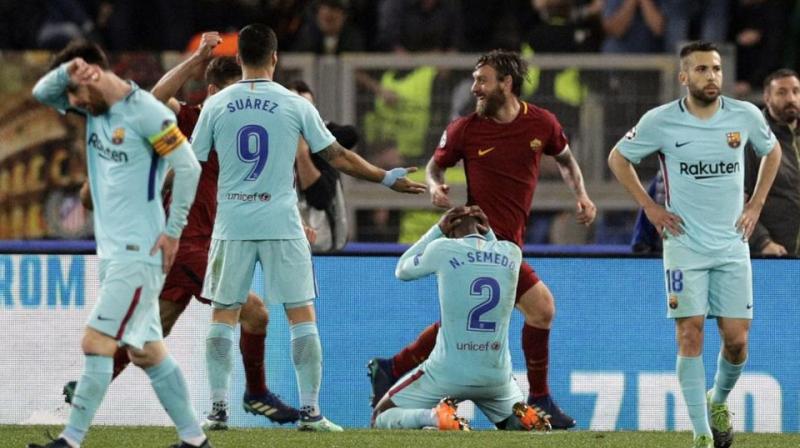 Lionel Messi and Co. lost to Roma 3-0 in Italy earlier this week, relinquishing a 4-1 first-leg win and getting eliminated in the quarter-finals for the third straight season. (Photo: AP)

Madrid: Suddenly, the Champions League has become a tough challenge for Barcelona.

The Spanish club thrived in nearly every competition they played over the last few years but have failed to succeed recently in the top European club competition.

Lionel Messi and his team mates lost to Roma 3-0 in Italy earlier this week, relinquishing a 4-1 first-leg win and getting eliminated in the quarter-finals for the third straight season.

“All we can do is apologize to our fans for the way we lost,” Barcelona midfielder Sergio Busquets said. “This is the toughest loss since I’ve been with Barcelona, because of the way it happened. I’d be lying if I said that this could help us in some way in the future, because last year we lost in a similar manner.”

Barcelona were eliminated by eventual runners-up Juventus last season, losing 3-0 in Turin and being held to a scoreless draw at home in the second leg. In 2016, Barcelona fell to Spanish rivals Atletico Madrid 3-1 on aggregate, winning 2-1 at home and losing 2-0 in Madrid.

“We want to be contending for the Champions League title year after year,” Barcelona president Josep Bartomeu said. “We were hopeful of advancing to the semi-finals after having played a great first leg. Now we have to carefully analyse what happened and try to move on.”

Since 2015, when they won their last Champions League title, Barcelona were dominant in other competitions, winning two Spanish leagues, three Copa del Reys, one Club World Cup, one Uefa Super Cup and one Spanish Super Cup.

Messi was a crucial component in nearly all of those triumphs for Barcelona, but the playmaker performed below expectations in the team’s recent Champions League failures. He didn’t score in the six quarter-final games that led to Barcelona’s recent eliminations.

The team’s other players couldn’t do enough help Barcelona advance then, and this time Messi had even less support.

Neymar left in the off-season, and the players who joined the club after his departure were not able to play up to the same level. Ousmane Dembele, touted as the main replacement for the Brazil forward, was marred by injuries and wasn’t able to establish himself as a reliable attacking partner for Messi and Luis Suarez.

Dembele was on the bench Tuesday, entering the match in the final minutes as a substitute.

Philippe Coutinho also arrived to help fill Neymar’s absence, but he was ineligible to play in the Champions League because he had already played for Liverpool earlier in the tournament.

Right back Nelson Semedo, another off-season signing for Barcelona, was the player unsuccessfully trying to stop Roma defender Kostas Manolas when he scored the 82nd-minute decisive goal for the hosts on Tuesday.

This was Barcelona’s first Champions League loss under coach Ernesto Valverde, who replaced Luis Enrique at the end of last season. “We have a very competitive team and they will recover from this,” Bartomeu said. “We still have other tournaments to play and we have to focus on them.”

Although the loss in Rome ended Barcelona’s chances of winning the treble, the team remain in good position to win the Spanish league and the Copa del Rey. Barcelona have an 11-point lead over Atletico Madrid with seven matches left, and they will face Sevilla in the Copa del Rey final on April 21 trying to win their fourth straight Copa title.

“It will be very difficult to recover,” said veteran Barcelona midfielder Andres Iniesta, who most likely played in his last Champions League match. “But we don’t have any other option. On Saturday, we have another match to play and we have to give our best to try to win the titles that are still achievable.” Barcelona host third-place Valencia on Saturday looking to achieve a Spanish league record of 39 consecutive games unbeaten. They share the record that Real Sociedad set in 1979-80.