Constantine’s men edge out Kyrgyz Republic to go atop table. 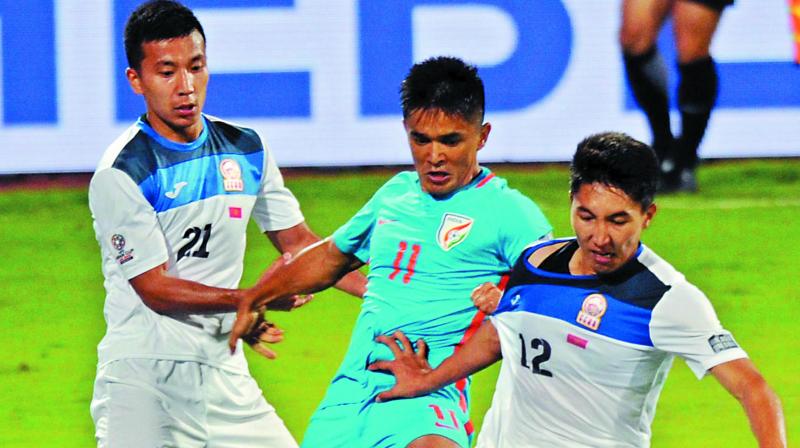 Bengaluru: It seems like we are bound to run out of superlatives for Sunil Chhetri.

It was the captain, back in the line-up after sitting out the Nepal game last week, who made the difference in a display of pure individual brilliance.

His goal had it all. Picking up the ball in his own half, Chhetri beat the first press with a side step before embarking on a dizzying run full of pace and power, riding two challenges, and playing a give-and-go with Jeje and arrowing his effort hard and low into the net.

Chhetri did it again. It proved to be the decisive goal as India edged Kyrgyz Republic 1-0 to go three points clear on top in their AFC Asian Cup qualifier Group A table at the Sree Kanteerava Stadium on Tuesday.

While the poster boy of Indian football might grab all the highlight, it was a masterful performance by the home side who played with game intelligence and discipline.

The visitors were forced to make an early substitution when Zemlyanuhin Anton failed to get up following a hard collision with Gurpreet Singh Sandhu. The striker, who was stretchered out, was replaced by Edgar Bernhardt.

But captain Mirlan Murzaev showed that they are still a potent side when he left two defenders for dead with a shimmy and forced Gurpreet into a full stretch save.

Borges stamps his mark
India slowly grew into the game thanks in no small part of the athleticism of Rowllin Borges who was seemingly everywhere in the middle. With eight outfielders behind the ball and midfielder playing wide, there were little chance for the wing backs to overlap but it did lend defensive stability for Constantine’s men.

Jackichand Singh worked hard on the right flank but was often found wanting with his final delivery, most notably fluffing his lines when released into acres of space by Chhetri in the 22nd minute.

The India captain remained the most potent weapon for Constantine on the field with his energy, technique and vision, even playing a 40-yard one-two with Jackichand which ended with Holicharan Narzary firing a shot at the keeper.

Frustrated by their inability to penetrate the box, the Krygyzs fired shots from distance causing a few nervy moments, but nothing that the Indian defence couldn’t handle.

The second half saw a lot more of the fervent goal-line actions with Israilov Akhlidin smacking the post with a wonderful effort. At the other end, Narzary, who did well to stay alert after a corner was cleared, found Chhetri with drilled cross but the captain, unbalanced and under pressure, uncharacteristically fired over from three yards out.

There was still more action within the first 15 minutes of the restart as Israilov, a menace with his pace and close control, teed up Murzaev for a shot which was saved by Gurpreet but the rebound by Vitalij Lux needed a combined effort from Sandesh Jhingan and Anas Edathodika on the goal-line to preserve the lead.

The stadium, loud as it was, went more than a few decibels high when Chhetri atoned for his earlier mistake by putting his side ahead nine minutes after the break.

The Krygys did come close to pulling back but Gurpreet was in no mood to give up his clean sheet even as substitute Robin Singh skied an effort with just the keeper to beat at the other end.