Zidane took over a team with nothing to play for and a squad he knew was in need of reform. 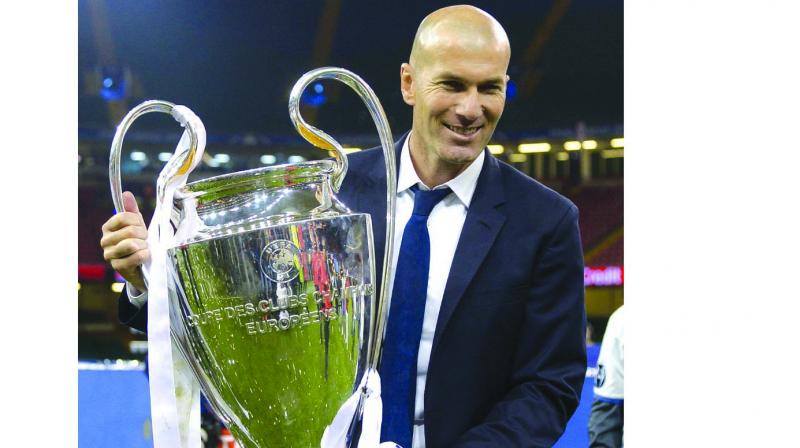 In his 11 games at the end of last season, Madrid won five, the only promise of progress the words Zidane kept repeating. "Things will change, for sure," he said. (Photo: File)

Madrid: Zinedine Zidane returned to save Real Madrid and the time has come for results.

In a packed-out press conference under the Santiago Bernabeu in March, the club's president Florentino Perez delivered the grandest of re-introductions.

"We need to start working on a glorious new era," said Perez. "That is why we welcome back Zinedine Zidane." Some might have expected a bounce but nobody blamed the coach when performances continued to drag and the gap behind Barcelona, rather than narrowing, widened.

Zidane took over a team with nothing to play for and a squad he knew was in need of reform. He knew because he had left it nine months earlier, just before it was broken.

There was no quick fix. In his 11 games at the end of last season, Madrid won five, the only promise of progress the words Zidane kept repeating. "Things will change, for sure," he said.

Zidane denied it but they were seen as trials, every line-up scanned for clues as to who would survive the summer.

Yet in some ways, none of it mattered and the results, not to mention attendances at the Santiago Bernabeu, said as much. "The best thing for us is that it's over," said Zidane, after the season ended in defeat.

And now it begins again, the season, and Zidane's second era as a coach. Many wondered why he came back, risking everything after the perfection of three Champions League titles out of three.

The assumption was he returned to a stronger hand, able to make demands the club were ready to meet and with the backing to rebuild in the way he had always wanted.

He might have been encouraged too when Eder Militao, Ferland Mendy, Luka Jovic, Rodrygo and Eden Hazard all signed for a total close to 300 million euros.

Hazard was the headline act, a throw-back to a previous era that Zidane knew well when the world's most glamorous players seemed to walk through the doors every year.

"I'm not a galactico, not yet, but I hope I will be one day," said Hazard when he joined.

But Madrid's pockets are not as deep as they once were and sales were also needed, by the club and their coach.

Zidane showed no inclination to make soothe and use Gareth Bale, instead urging the Welshman to make a move to China.

"It is very close," Zidane said. "We hope he leaves soon, it would be best for everyone." Bale's agent told AFP Zidane was a "disgrace" and if the Frenchman had hoped to push the deal over the line, he would be disappointed as Madrid changed their mind over the fee.

James Rodriguez is also yet to leave and there were others that proved more difficult to bring in such as Paul Pogba and even Neymar.

In other areas, Zidane has resisted change, backing experience over youth even if many believed experience last season had turned into apathy.

Marcelo, Casemiro and Keylor Navas have stayed while Marcos Llorente was allowed to join Atletico Madrid and Sergio Reguilon and Dani Ceballos were both sent out on loan.

For all the talk of upheaval, Madrid's line-up against Celta Vigo on Saturday is likely to have a distinctly familiar feel.

Yet there could be a new formation, with a 3-5-2 tried after some underwhelming showings in pre-season, allowing Marcelo and Dani Carvajal greater freedom as wing-backs and Hazard to play centrally behind Karim Benzema.

And a shift in focus. Madrid have won La Liga only once in the last seven years, their failures in Spain excused only by unprecedented success in Europe.

"For us next year, the league must be our number one priority," Zidane said in April.

In that sense, Madrid might profit if Barcelona aim their focus at the Champions League. But the Catalans and Atletico Madrid have both strengthened and look ready to challenge again.

"La Liga is the longest competition, it's the one that cannot be missed," Zidane said. "I'm going to drill that in the heads of my players." His players. Now they have to deliver.