Ronaldo gave a perfect start to his side's new campaign by scoring twice in Madrid's comfortable 3-0 win over Cypriot visitors. 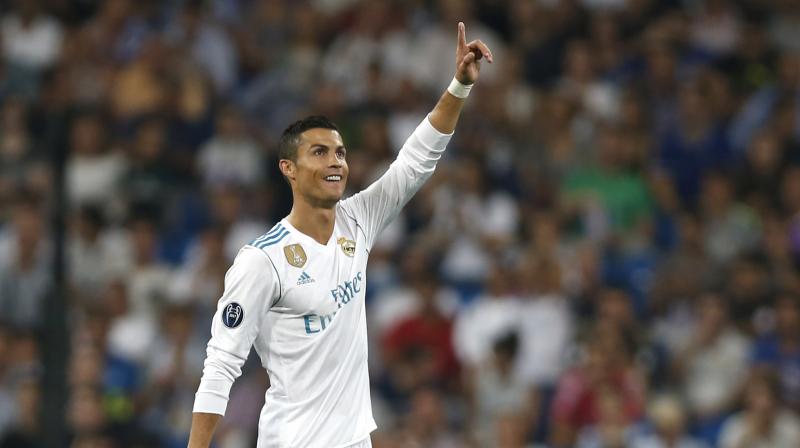 Ronaldo admitted that both he and Madrid are targetting a hat-trick of the European crown.

Madrid: Portuguese star striker Cristiano Ronaldo has stated that the "Champions League is Real Madrid's competition" after he helped the two-time holders make a winning start to their title defence here at the Santiago Bernabeu today.

The reigning Ballon d'or winner gave a perfect start to his side's new campaign by scoring twice in Madrid's comfortable 3-0 win over Cypriot visitors APOEL in the opening match. And Ronaldo admitted that both he and Madrid are targetting a hat-trick of the European crown.

"There's still a long way to go; let's go game by game. First we have the group stage then we can see. We, of course, want to win this tournament. The Champions League is Real Madrid's competition and we want to win it," goal.com quoted Ronaldo, as saying.

It was in the 12th minute of the match when Ronaldo put Madrid ahead before doubling his side's lead by converting a penalty corner six minutes into the second half.

With his trademark brace, Ronaldo, who is still serving a five-match domestic ban for pushing a referee in the Supercopa de Espana, took his Champions League tally to 107 goals.

Subsequently, Madrid skipper Sergio Ramos added further woes on APOEL when he converted an exquisite bicycle kick just in the 61st minute of the match in the Spanish capital.

Delighted to make a return, Ronaldo admitted that Champions League is a `special` tournament and that it is extremely important to score goals here.

"I'm delighted to be back playing.This is a special competition and to start playing again and scoring goals is very important for me. I helped the side and feel good about that," the striker said.

"It was a game we needed to win; we played at home and wanted to start the Champions League well. I think the side were good; we know we were taking on a defensive outfit. We could've scored more but, in the end, it was a good result and we've started off well and we're happy with that," Ronaldo added.

The Zinedine Zidane-led side will lock horns with Dortmund in their next league clash on September 27.