Wuhan Zall could not leave because of the restrictions in China, but expedited its departure due to the worsening situation in Spain 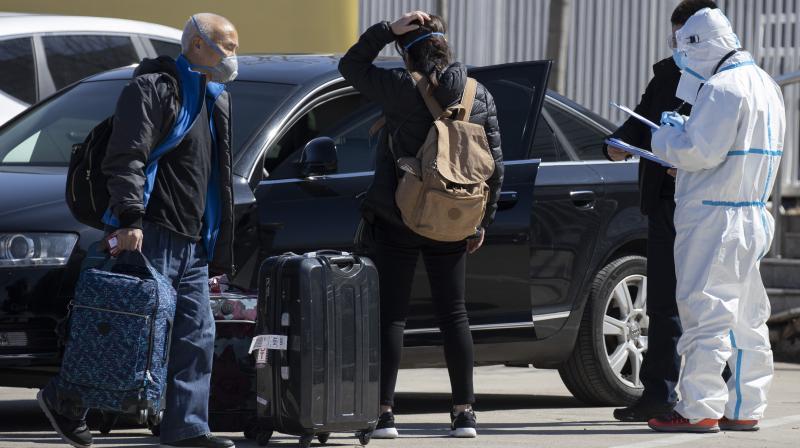 Passengers wait outside an exhibition center converted into a transit point for screening overseas arrivals in Beijing on Sunday. From quarantining travelers from overseas to nabbing those sneaking in with fevers, China and other parts of Asia are scrambling to prevent the new coronavirus from coming back to where it first broke out. AP Photo

Madrd: The Chinese soccer team that was originally stuck in Spain because of the coronavirus outbreak is going back home to try to avoid its rapid spread in Europe.

Wuhan Zall was expected to return to China on Saturday, nearly 1 1/2 months after it arrived in Spain for preseason training. The team had not been able to leave because of the restrictions in China, but expedited its departure because of the worsening situation in Spain.

The team initially planned to leave Spain mid-February but had extended its stay in the southern region of the country until at least the end of March. That plan changed this week because of the sharp spike in the number of cases in Spain and Europe generally.

"Things are well over there (in China) now,'' Jose Gonzalez, the team's Spanish coach, told The Associated Press on Saturday. "The Chinese league will likely start at the beginning of May. We will have to enter quarantine when we arrive, so the sooner we leave, the better.''

The team will first go to the city of Shenzhen, where it is expected to finish its preseason training for the Chinese Super League, the country's main first-division soccer competition. The league was supposed to start on Feb. 22 but was suspended because of the virus.

The city of Wuhan was the epicenter of the outbreak that rapidly spread to other countries and infected more than 145,000 people worldwide, with 5,400 deaths.

Spain was set to follow Italy on Saturday in declaring a nationwide lockdown as European countries took ever more sweeping measures to reduce contact among people and slow the accelerating spread of the coronavirus. Health authorities in Spain said more than 5,700 people were infected and the number of cases could reach 10,000 in the coming days.