Liverpool beat Chelsea 2-0 at Anfield to move to 85 points with four games remaining and City are on 83 but with an extra game in hand. 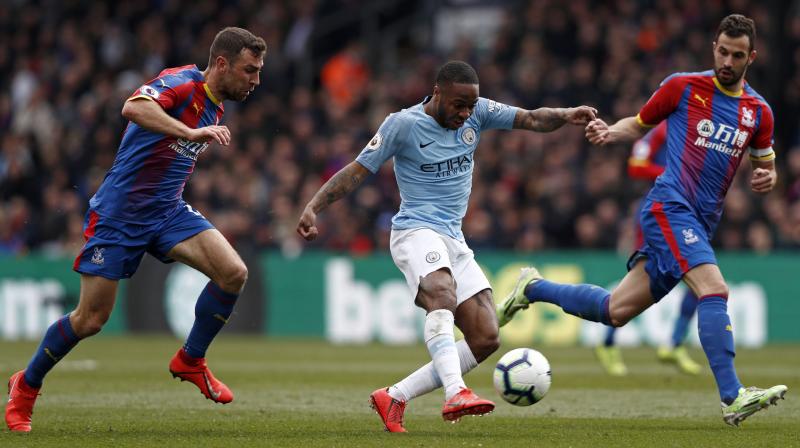 The victory was the ninth straight win for City in the Premier League and manager Pep Guardiola says they will need to extend that run to 14 victories to successfully defend their title. (Photo: AFP)

Liverpool beat Chelsea 2-0 at Anfield to move to 85 points with four games remaining and City are on 83 but with an extra game in hand.

The victory was the ninth straight win for City in the Premier League and manager Pep Guardiola says they will need to extend that run to 14 victories to successfully defend their title.

“We expect Liverpool to win all of their remaining games, but the Premier League is in our hands and we have to win all our games and that’s what we need to do if we want to win the title back-to-back,” he said.

Having missed an easy chance early on, Sterling put City ahead in the 15th minute when he ran on to Kevin De Bruyne’s inch-perfect pass from behind the halfway line and fired past goalkeeper Vicente Guaita.

The England international added a second for his 17th league goal of the season after the break, meeting Leroy Sane’s first-time cross into the box with a calm left-footed finish that wrong-footed Guaita as it rolled in.

Palace ensured an entertaining finish to the contest when Luka Milivojevic scored from a free kick with nine minutes to go after midfielder James McArthur was brought down on the edge of the penalty area.

City, however, sealed the deal with their third of the match as De Bruyne latched on to a poor pass from defender Aaron Wan-Bissaka before feeding substitute Gabriel Jesus who finished emphatically.

Former Liverpool forward Sterling predicted that the title race will endure until the last minute of the season.

“100 percent the way Liverpool have been playing, it will go down to the wire. I don’t see us slowing down now. Liverpool have a great squad, great self-belief, but so do we,” Sterling said.

City now face a crucial ten days starting with a home game against Tottenham Hotspur on Wednesday in their Champions League quarter-final second leg, trailing 1-0 from the opening game.

Guardiola’s side then play Spurs at the Etihad again, in the league, on Saturday before the Manchester derby at Old Trafford on April 24.

“The players have shown me they want to do it - I didn’t have any doubts about that - and we have taken three points from a very difficult place to win,” said Guardiola.

“We have played with incredible personality in the last two or three months - for the last month we’ve known that if we drop points it will be more difficult if not impossible to win the title.

“Of course, Liverpool or we could drop points when you don’t expect, and football is unpredictable in that sense,” he added.

“But we don’t have any complaints - we have taken 183 points in two seasons and still have five games left. Those are incredible numbers and show how consistent we are.”