Suarez's last goal in Europe's top club tournament was on April 4, 2018. It's been a downward trend for the player. 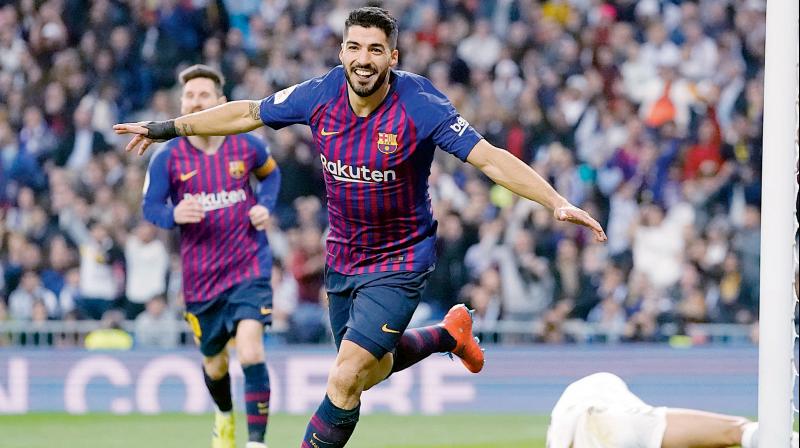 Suarez joined Barcelona in 2014 from Liverpool with his reputation in tatters for biting an Italy defender in the World Cup. (Photo: AP)

Barcelona: Luis Suarez has found the net 23 times this season, including goals in his last two Spanish league matches that helped keep Barcelona on track to defending its domestic title.

But the Uruguay striker will be seeking his first goal in the Champions League in more than a year when Barcelona tries to finish off Manchester United on Tuesday in the second leg of the quarterfinals.

Suarez came very close to breaking his scoreless streak last week at Old Trafford, when his header deflected off Luke Shaw before finding the net for an own-goal by the United defender in the 1-0 victory for Barcelona.

Suarez's last goal in Europe's top club tournament was on April 4, 2018. It's been a downward trend for the former Liverpool player in continental competition. The 32-year-old Suarez has 20 goals in 50 career appearances in the Champions League, but only two goals in his last 25.

But Barcelona coach Ernesto Valverde has never questioned Suarez and has defended his contributions to the team even when he isn't scoring. "For me, Luis is the same as always, which is playing at the high level he always maintains," Valverde said last month after Suarez earned a penalty and set up another goal in a 5-1 win over Lyon in the round of 16.

"I know that people will again be talking about the goals he didn't score, but this time he gave (Philippe) Coutinho the chance to score and he earned a penalty that he didn't even take."

Suarez joined Barcelona in 2014 from Liverpool with his reputation in tatters for biting an Italy defender in the World Cup. He made an immediate impact, helping the club sweep the league, Copa del Rey and Champions League, scoring seven goals in Europe.

He did even better in 2015-16, scoring eight times in that edition of the Champions League. But then his production fell off spectacularly in Europe.
As Suarez has gone, so has Barcelona. Since winning its fifth and last European Cup, Barcelona failed to advance past the quarterfinals in each of the last three seasons.

Suarez's recent struggles in the Champions League are in contrast with his consistent scoring in the Spanish league and Copa del Rey, providing the team with an ideal second option up front and forming a devastating duo with Lionel Messi.

He scored 30 times in La Liga and Copa last season, when Barcelona won both.
And his 20 league goals this season are more than any other player in the competition - except, of course, Messi, who has 33. Suarez's hat trick in a 5-1 rout of Real Madrid, when Messi was unavailable due to injury, strongly damaged the title challenge by Barcelona's fierce rival in October.

Suarez's most recent goals have proved key to giving Barcelona a comfortable domestic lead that lets it focus on the Champions League as the season approaches its climax. He scored on the last kick of the match to salvage a 4-4 draw at Villarreal two weeks ago. He then broke the deadlock in a 2-0 victory over Atletico Madrid last weekend.

Suarez served a one-game suspension on Saturday when Messi and other starters rested in a 0-0 draw at Huesca. Suarez also enjoys knowing what it's like to score against United. He did so three times in six games while playing for Liverpool.