This hunger has been building over the past two years under coach Stephen Constantine. 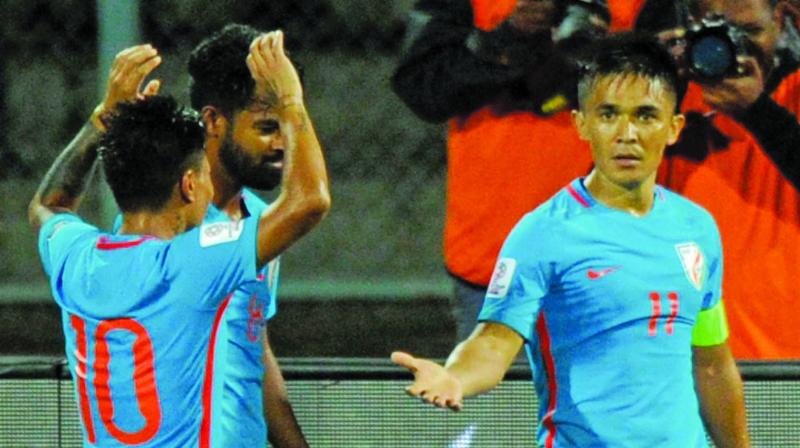 Bengaluru: There was just one thought in Sunil Chhetri’s mind as the India captain tore through the heart of Kyrgyz Republic on Tuesday: Don’t fall.

It might seem odd that a man, in the midst of scoring what may very well be his best and most significant goal in his career, was thinking of such an innocuous thing. But then greatness comes from being able to express complexities in the simplest of form.

“I got a tackle first time, but I was telling myself ‘don’t fall’. When I got the next tackle, ‘don’t fall’. Then I passed it to Jeje and kept running. He delivered a top ball and all I did was wrap my leg around it. It’s a good feeling,” said Chhetri about his goal.

As uncomplicated as it sounds, it’s the next thing he said that sheds light on the mentality of the Indian team.

“The first thing I did after the celebration was look at the clock and tell the team, ‘Let’s go. Let’s get one more and put the match to bed.”

This hunger has been building over the past two years under coach Stephen Constantine.

The team now have 13 wins from their last 15 matches including eight on the bounce. It’s taken a long time to come but there is no doubt that this team have character and strength.

“You saw some of the tackles coming in from them (Kyrgyz Republic) and we didn’t retaliate. We played smart. These boys are magnificent,” remarked Constantine.

“I am not someone to looks at records. This (13 wins from 15 games), is phenomenal at any level,” he added.

As it stands, the Indian team are a tough nut to crack. They have a no-nonsense back four of which the full backs play as defenders making them less susceptible to counter attack. In Gurpreet Singh Sandhu, they have a goalkeeper with outstanding athleticism and height. The fact that his stint in Norway has also made him into an offensive-minded keeper, keen to charge off his line to smother danger, only adds to the team’s repertoire.

“We defend as a team. The entire 11 and Gurpreet made unbelievable saves. Players working their socks off to make sure we are compact. They had chances, we didn’t stop and played and won as a team,” Constantine observed stressing on the team’s mental fortitude.

However much the team has improved, there is still a long way to go.

A dependency on Chhetri, who often starts and finishes attacks while scurrying around the field for 90 minutes with great effectiveness, being a major one, delivery from the wide players and transition being couple of others.

But despite the scattering dark clouds in the otherwise blue sky, there is clearly togetherness in this side.

“I think we have improved as a team over the past year,” stressed defender Sandesh Jhingan.

“Three years ago when we started, we had a new coach. It took some time for him to get his system in place. It’s a still a long road ahead and hopefully we will get better as we play more games.”

A belief taken a bit further by Gurpreet.

“I think we have learned how to win and we need to learn to keep this habit of winning. We need to do that to go where we need to go,” he opined.

“You need to be fearless and show that you can be physical. All teams who have come here have struggled. Hopefully other teams will realise that India is not an easy team to play against especially at home.”

A cursory glance at the fixtures and the current form of the Blue Tigers, the Asian dream seems more than achievable.