The 32-year-old former Betis shot-stopper joined Liverpool on a free transfer to replace the departed Simon Mignolet on August 5. 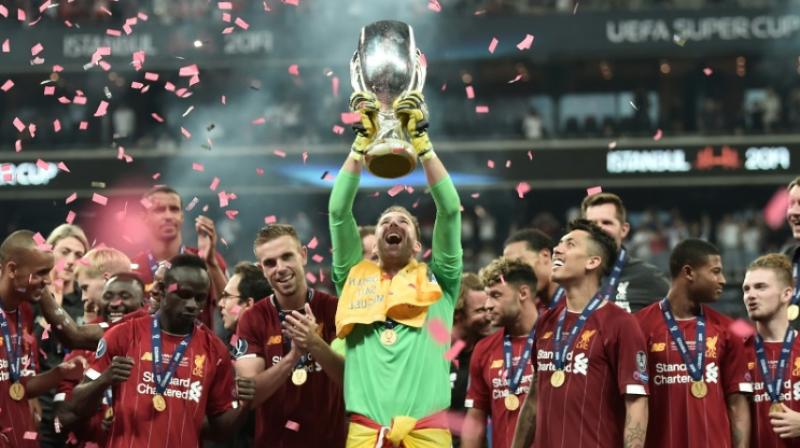 Adrian raises aloft the UEFA Super Cup after his save in the penalty shoot-out allowed Liverpool to beat Chelsea in Istanbul. (Photo:AFP)

Istanbul: Juergen Klopp hailed "incredible" UEFA Super Cup hero Adrian and then admitted he had no idea where the goalkeeper even was a fortnight ago.

The Spaniard, only in the side because of an injury to number one goalkeeper Allison Becker, saved Tammy Abraham's penalty to give Liverpool a 5-4 shootout win against Chelsea after the showdown between Champions League and Europa League winners had finished 2-2 in Istanbul on Wednesday.

The 32-year-old former Betis shot-stopper joined Liverpool on a free transfer to replace the departed Simon Mignolet on August 5, the day after Klopp's team lost on penalties to Manchester City in the Community Shield.

Released by West Ham United, he was thrust into the spotlight when he had to replace the injured Alisson in the first half of the Premier League opening 4-1 win against Norwich on Friday.

"I don't know where Adrian was two weeks ago when we played Man City," said Klopp after seeing his European champions win the Super Cup for the fourth time.

"When I spoke to him for the first time it was clear he would need time to get fit, but we didn't have that time so he has to be fit now, and he was fit, he played an incredible game, he made sensational saves."

Adrian made notable interventions during the game, diving at the feet of Mateo Kovacic in the first half and batting away a Mason Mount strike late in extra time.

However, he also fouled Abraham to give away the 101st-minute penalty which Jorginho scored to make it 2-2 after Sadio Mane's 95th-minute second goal had seemed to have put the Merseysiders on course for an extra-time victory.

"In penalty shootouts you're always lucky but his performance over 120 minutes was incredible, making the save from the penalty was the icing on the cake," said Klopp.

"He helped us a lot and he can be really proud of what he did tonight," added the German manager, who described Adrian as "a proper personality in the dressing room".

Adrian had once been a regular for West Ham but did not play in the Premier League last season and his last appearance before arriving at Anfield had been an FA Cup defeat by third-tier AFC Wimbledon in January.

"Welcome to Liverpool! It was a crazy week, but with them it's so easy playing at the back, so I am really happy for the team, happy to get that trophy, that title," Adrian told BT Sport.

Klopp was also effusive in his praise of the all-female refereeing team, headed by France's Stephanie Frappart, even if he was not happy with the penalty awarded to Chelsea in extra time.

"I told the ref team that if we had played like they whistled we would have won 6-0, that was my opinion, that they played a brilliant game."