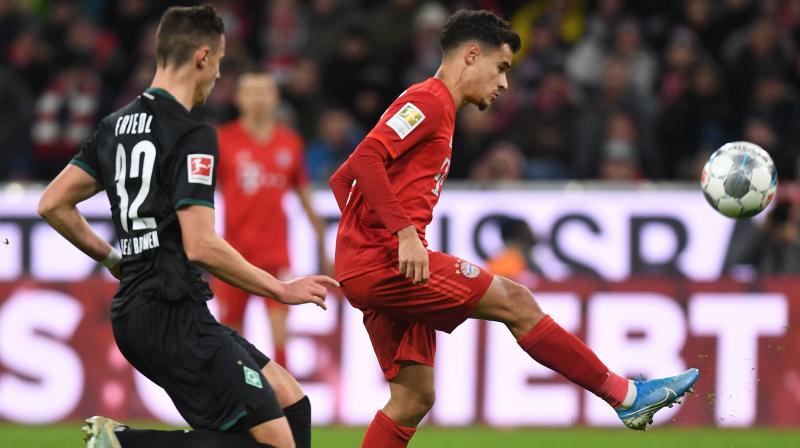 The Bavarians, missing several players through injury, climbed to fourth place on 27 points, six behind RB Leipzig, who beat Fortuna Duesseldorf 3-0 to climb to the top of the Bundesliga on 33 points.

Borussia Moenchengladbach, on 31, can reclaim the lead with a win at VfL Wolfsburg on Sunday.

Borussia Dortmund stayed two points ahead of Bayern in third after a 4-0 win at Mainz 05 but Bayer Leverkusen missed a chance to move into the top four after suffering a shock 2-0 defeat at strugglers Cologne and instead dropped to seventh on 25.

Bayern’s man-of-the-match Coutinho, who also helped set up two more goals, delivered at just the right time with the Bavarians, struggling to find their rhythm under interim coach Hansi Flick, were at risk of losing touch with the top spots.

The Brazilian forward, brought in on loan from Barcelona this season, scored his first Bundesliga treble with Bayern playing a dominant second half.

“Everyone in the stadium today enjoyed themselves,” a relieved Flick told reporters. “That was really good. We are delighted with the players’ performance today and his (Coutinho’s).

“We showed character when we turned the game before the break.”

However, Bayern fell behind in the 24th minute to a Milot Rashica goal after they missed golden chances, including top scorer Lewandowski, as had been the case in recent weeks.

But their wastefulness was not punished this time as goals from Coutinho in the 45th minute, and Lewandowski in first-half stoppage time, turned the game for the hosts.

Brazilian Coutinho then chipped a superb David Alaba pass over Bremen keeper Jiri Pavlenka for their third goal in the 63rd as Bayern completely bossed the game following the break.

Poland forward Lewandowski added a fifth after 72 minutes to take his league total to 18 goals, and Thomas Mueller also scored before Coutinho rounded off a fine performance with another goal to complete his hat-trick.

Leipzig had a little tougher task at Fortuna despite taking a second minute lead through Patrik Schick and dominating the first half.

Timo Werner netted his 16th goal of the campaign, converting a 58th minute penalty, to settle their nerves after the hosts had hit the post. Nordi Mukiele added a third in the 75th minute to seal their sixth consecutive league win.