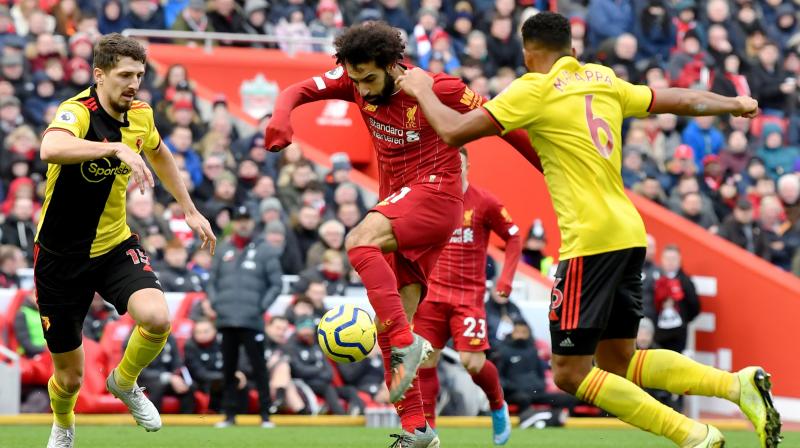 Liverpool forward Mohamed Salah kept up his scoring streak against Watford with a brace as the Premier League leaders sealed a 2-0 victory over the bottom club at Anfield on Saturday. (Photo:AFP)

Liverpool forward Mohamed Salah kept up his scoring streak against Watford with a brace as the Premier League leaders sealed a 2-0 victory over the bottom club at Anfield on Saturday.

The win restored Liverpool’s 11-point advantage over second-placed Leicester City, who host Norwich City later in the day, while Watford’s fourth defeat in five games left new manager Nigel Pearson’s side rooted to the bottom of the table.

Liverpool took the lead with a typically lethal counter-attack in the 38th minute as Sadio Mane collected the ball on the left and released Salah, who sprinted towards goal before cutting in and curling a shot home with his right foot.

Mane thought that he had doubled the lead five minutes after the break but the Video Assistant Referee (VAR) showed he was marginally offside when nodding the ball in from Xherdan Shaqiri’s whipped cross.

Salah then scored his eighth league goal against Watford in five matches with a brilliant back-heeled flick in added time with his weaker right foot again to secure three points for Juergen Klopp’s side.

“We played a tough team today - the way they played, they should not be where they are in the table,” Salah told BT Sport.

“We have experience in playing out games, I think sometimes the crowd gets nervous when we have only scored once, but we are always confident of working towards the win.”

The visitors had earlier missed the chance to go ahead when Abdoulaye Doucoure mishit his shot after Etienne Capoue escaped the offside trap to set him up.

Watford had scored only nine goals in the league coming into this match, and the reason for that became evident when poor finishing cost them yet again as an unchallenged Ismaila Sarr scuffed his shot after goalkeeper Alisson Becker parried away Gerard Deulofeu’s cross.

There were some positives for Pearson, Watford’s third manager of the season following the sacking of Quique Sanchez Flores this month and Javi Gracia earlier in the campaign, as the Hornets created a number of chances in the second half.

The lively Deulofeu found himself one-on-one with Alisson but the Brazilian stopped the Spaniard’s shot in the 54th minute and also denied Sarr the opportunity to equalise.

Watford also hit the post from the corner after a poor back pass from Dutchman Virgil van Dijk nearly beat his own keeper.

Left back James Milner, who switched to a midfield role after Georginio Wijnaldum was substituted, said the blustery conditions made life tough.

“The wind was difficult and it made it tough. Sometimes you have to play the game to the conditions... it’s the same for both teams but the battle made it important to get three points.”