Madrid put in the kind of lethargic performance which has plagued their season, with Asensio and Varane missing good 1st-half chances. 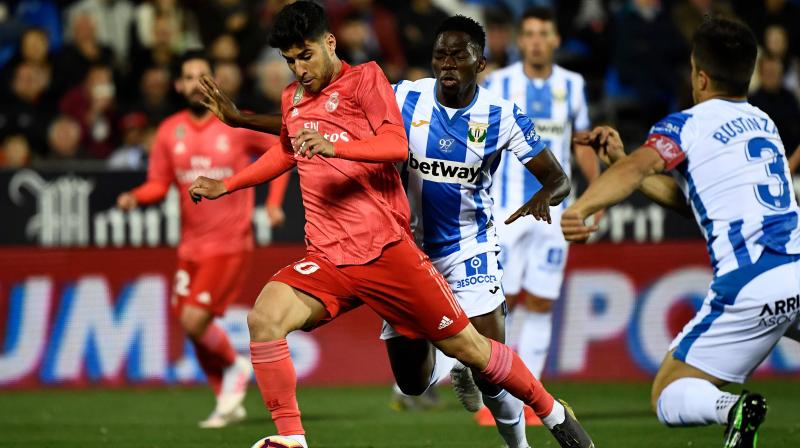 Zinedine Zidane’s side, who are third in the table and 13 points behind leaders Barcelona, were uninspired against local rivals Leganes. (Photo: AFP)

Leganes: Real Madrid stumbled to a 1-1 La Liga draw at Leganes on Monday, the latest disappointing result in a nightmare season for the European champions.

Zinedine Zidane’s side, who are third in the table and 13 points behind leaders Barcelona, were uninspired against local rivals Leganes.

Madrid, who were also knocked out of the Champions League at the last-16 stage by Ajax Amsterdam, put in the kind of lethargic performance which has plagued their season, with Marco Asensio and Raphael Varane missing good first-half chances.

Jonathan Silva fired Leganes ahead in the 45th minute with their first chance of the game, driving home from the edge of the box.

Karim Benzema equalised at the start of the second half and Marcelo saw a shot tipped away as Madrid enjoyed a short period in ascendancy.

Leganes, 11th in the table, went close to winning the game but Youssef En-Nesyri had a goal correctly disallowed for offside.

Madrid, playing on Monday for the first time in three years, in a slot reserved for teams not involved in Europe, produced a suitably subdued performance.

“It’s a really tricky season for everyone, it’s hard to explain and we all feel sad, but the situation is complicated,” said Madrid goalkeeper Keylor Navas.

“In this club there’s always pressure and that cannot be an excuse. We have to be mentally prepared. We are proud of this shirt and we love it.”