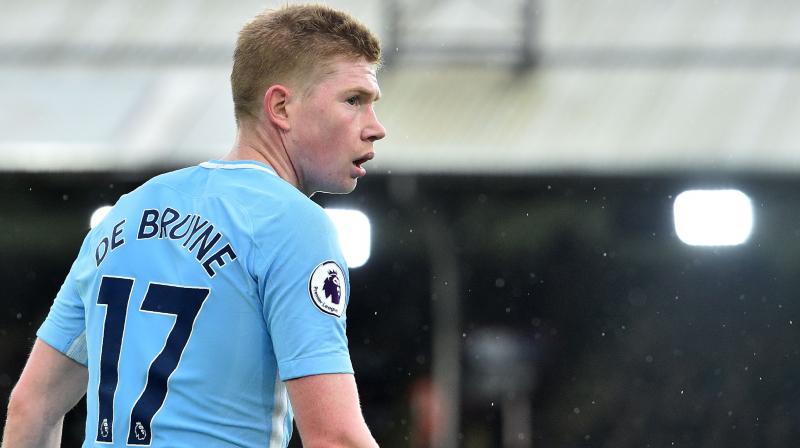 The 27-year-old attacking midfielder, who on Wednesday will be pivotal against Tottenham, as Manchester City aim to stay on track for a quadruple this season. (Photo: AFP)

London: Belgian star Kevin de Bruyne has acknowledged that being rejected by a foster family as a teenager fuelled his footballing success.

The 27-year-old attacking midfielder, who on Wednesday will be pivotal as Manchester City aim to stay on track for a quadruple this season in overhauling Tottenham's 1-0 first leg lead in their Champions League quarter-final clash, has bounced back from two knee injuries this season to the kind of form he has regularly displayed since City paid 54 million pounds (70.6 million euros) to German side VfL Wolfsburg for him in 2015.

However, it may never have come to pass like that but for the deep hurt he suffered aged 15 at the hands of the family in Genk who took him in when he was with the club's academy.

"That year went by, and I was doing well in school, doing well in football. No fights. No problems," he told The Players Tribune. At the end of the year, I packed my bags and said goodbye to my foster family. They said: "We'll see you after the break. Have a good summer."

De Bruyne said his sense of serenity was shattered hours later. "As soon as I got back to my parents' house, I walked in the door and could see that my mother was crying," he said.

"I thought maybe somebody had died or something. I said, 'What's the problem?' "And my mother said the words that probably shaped my whole life.

'They had really hurt me'

De Bruyne, who admitted his negative pre-conceived ideas about City team-mate Raheem Sterling were wide of the mark and in fact he is "one of the nicest most humble guys" in the sport, said he took his immediate angst out on the football.

"One thing really stuck with me. 'Because of who you are'. The words kept repeating in my head," he said. "I kicked the ball against the fence for hours.
And I remember at some point I actually said out loud, everything is going to be OK. In two months, I'm going to be in the first team."

"No matter what, I am not coming back home a failure. No matter what'. "Such was his success as he scored five goals for the second team after coming on as a substitute and the foster family sheepishly approached him again.

"The woman came up to me like everything was a big misunderstanding," said De Bruyne. "Maybe I should've found it funny, but at the time it wasn't funny to me. They had really hurt me." So I said, "No. You threw me in the garbage. Now I'm doing well and you want me back?"

"In the end, I should have just said thank you. That experience was the fuel for my career," said De Bruyne.