Mauricio Pochettino's side head to the Etihad Stadium for the quarter-final second leg looking to protect a slender 1-0 lead. 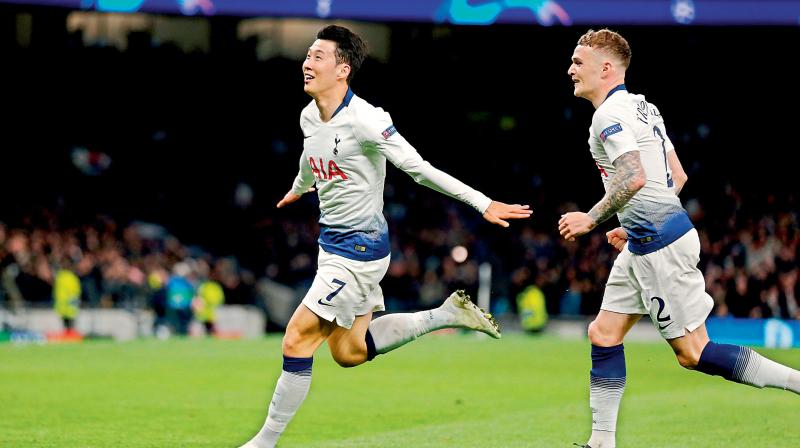 Tottenham's task has been made harder by injuries to Kane and Dele Alli. Kane is likely to miss the rest of the season after the striker suffered yet another ankle ligament injury in the first leg against City, while England midfielder Alli is a doubt after fracturing his hand in the same match. (Photo: AP)

London: Son Heung-min insists he has already proved he can shoulder the burden of replacing Harry Kane in Tottenham's Champions League showdown with Manchester City on Wednesday.

Mauricio Pochettino's side head to the Etihad Stadium for the quarter-final second leg looking to protect a slender 1-0 lead.

But Tottenham's task has been made harder by injuries to Kane and Dele Alli. Kane is likely to miss the rest of the season after the striker suffered yet another ankle ligament injury in the first leg against City, while England midfielder Alli is a doubt after fracturing his hand in the same match.

Losing two such influential players ahead of a do-or-die clash with the Premier League champions would be a hammer blow to most teams.

But South Korea forward Son has shown this season that playing without Kane need not be fatal to his side's European ambitions.

Son has scored nine goals in 10 matches with Kane absent this season and he said: "I just enjoy the football. Everyone, not just me, should enjoy the game and scoring and winning.

"We should not put pressure on ourselves about these situations. There's nothing better than the Champions League quarter-finals at the moment."

While Hugo Lloris deserved plaudits for saving Sergio Aguero's penalty, the first leg was won after Kane limped off thanks to Son's 78th-minute strike -- a typically cool finish after he alertly kept the ball in play as the City defence dithered.

In fact, Tottenham have won their last five matches without Kane and Son looks in perfect form to maintain that run at City's expense.

The 26-year-old scored the first goal in Tottenham's new stadium against Crystal Palace. Six days later, he was once again the toast of the 62,062 sell-out crowd as he drew first blood against City.

His pace, skill and astute movement make him a different proposition for central defenders than Kane and some have even suggested Tottenham look better with Son up front than the England captain.

That is a little far fetched, but such is his importance, Son was rested until the 87th minute in Saturday's 4-0 thrashing of Huddersfield in the Premier League.

Even then, he still managed to provide an assist in his brief spell on the pitch with a superb through-ball setting up Lucas Moura for his third goal.

Son's rise to prominence is even more impressive given he was so frustrated three years ago that he considered leaving Tottenham. Struggling for form and regular playing time, Son instead resolved to prove his worth after speaking to Tottenham boss Pochettino.

"Sometimes you have tough times to get better," said Son, who has scored 18 goals in all competitions this term.

"The club, the coaching staff, the players, when I have a tough time they help me lots to be here right now. I'm really grateful for this situation and I'm not finished. I try to improve every day."

Son showed his compassionate side this week when he reportedly donated around 100,000 pounds (USD 131,000) to the victims of a deadly fire in South Korea, which killed at least two people and left hundreds homeless.

His focus back on the eagerly-anticipated City tie, Son is confident Tottenham are primed to reach their first European semi-final since 1984.

"The Manchester City game will be a tough one, but I believe that if we play as a team and believe in ourselves, we can have a good result," he said.