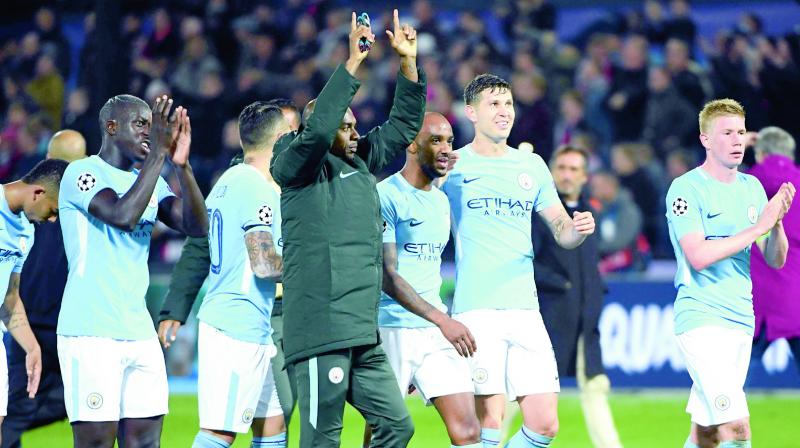 Manchester City face Watford in the Premier League on Saturday, with both having a chance to top the table. (Photo: AFP)

London: Big-spending Manchester City having a chance to go top of the Premier League on Saturday is no surprise, but the possibility their opponents Watford will climb to the summit of English football if they win at Vicarage Road certainly is.

Table-toppers Manchester United and Manchester City, currently second on goal difference, both have 10 points from their opening four Premier League games. But with United not playing until Sunday, City have a chance to leapfrog their local rivals.

City spent more than £200 million ($264 million) on new players during the recent transfer window, with the club desperate to make an impact on the Champions League in particular after bowing out in the last 16 last term.

Nevertheless it was an established City player in England centre-back John Stones who scored twice for Pep Guardiola’s expensively-assembled side as they won 4-0 away to Dutch champions Feyenoord in an impressive start to their Champions League campaign on Wednesday.

Spanish manager Guardiola was delighted by his side’s positive approach, saying: “We did not play back. We were aggressive.”

It was an ominous result for Watford yet Marco Silva’s men are unlikely to feel over-awed knowing that a home win on Saturday would take them to 11 points. That would mean Watford were at the summit of English football ladder for the first time since topping the old First Division in 1982.

Watford are still unbeaten under Silva and the Portuguese manager said: “It’s important at the moment that everyone, starting with myself, keeps their feet on the ground.”

Liverpool will look to put the frustration they felt at failing to beat Sevilla in a 2-2 midweek draw in the Champions League when they face northwest rivals Burnley at Anfield on Saturday.

Poor defending again proved a problem for Liverpool, who failed in an attempt to sign Virgil van Dijk from Southampton during the transfer window. However, Reds boss Jurgen Klopp, speaking after the Sevilla match, said: “I know a lot of people are looking around and they are always talking about the defence. That we didn’t sign this or that.”

The German boss added: “It’s not about this. It is about being dominant and losing, a bit, the grip on the game. We need to learn to be dominant and not give easy goals away.”