Adil Khan ensured that India at least secure a point from the home match as he rose highest to nod home a Brandon Fernandes corner kick. 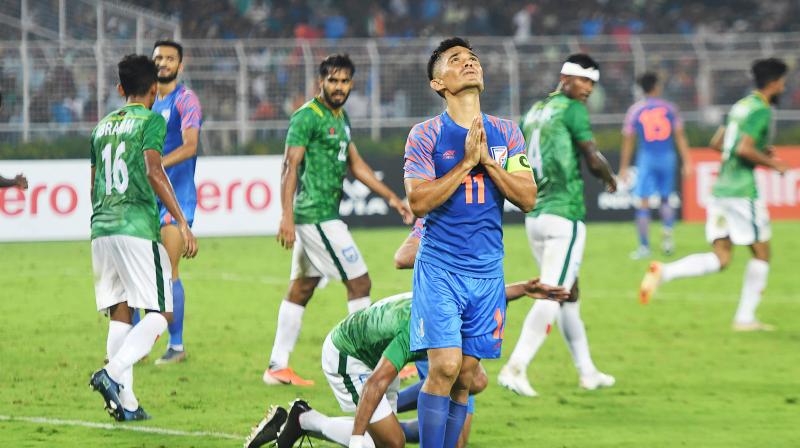 Kolkata: A last-gasp Adil Khan header saved the blushes for India, who played their worst game of the campaign, as the home side played out a 1-1 draw against Bangladesh in their World Cup qualifiers match here on Tuesday.

Saad Uddin gave Bangladesh the lead in the 42nd minute and the visitors looked like going back home with all the three points in the Group E match of World Cup qualifying second-round match.

Adil Khan, however, ensured that India at least secure a point from the home match as he rose highest to nod home a Brandon Fernandes corner kick in the 88th minute. A defeat at home would have severely dented India's hopes of advancing in the next round.

India had lost to Oman 1-2 in their opening match before holding Asian champions Qatar to a goalless draw in their previous match.

They now have two points from three matches, while Bangladesh stay at the bottom with one point from three games.

Bangladesh were the more organised and penetrating side as they put up a spirited show against India who were backed by a full-capacity crowd at the Saltlake Stadium.

Inspirational captain Sunil Chhetri was not at his best as also goalkeeper Gurpreet Singh Sandhu who kept at bay the marauding Qataris in the memorable drawn game in Doha.

Gurpreet misjudged the flight of the ball to let in Bangladesh's goal to the stunning silence of the packed 65,000-plus crowd.

It was Rahul Bheke who conceded a freekick on the left and Bangladesh captain Jamal Bhuyan curled it into the far post where Gurpreet missed the flight completely and Saad Uddin finished it with a diving header.

Ranked 83 places below India, Bangladesh looked more threatening and could have easily doubled the lead in the 54th minute when the right-winger Mohammad Ibrahim's shot hit the crosspiece.

India woke up from their slumber only late in the second half, making a flurry of chances but then Bangladesh defence gave a good account of themselves with Ibrahim making a goal-line clearance from Anas Edathodika's header.

In the 88th minute, Adil Khan equalised, a minute after Chhetri's shot was deflected. Brandon set it up with an accurate corner and Adil found it near the post to find the goal.

The Igor Stimac-coached side paced up their attack but it was too little too late then as Bangladesh proved a point, opening their account in Group E.

Earlier in the first-half, India had their share of chances. One such chance was in the 18th minute when Bheke's powerful header zoomed over the crosspiece.

India had their first shot on target in the fifth minute when Manvir Singh floated in a long-ball with Ashique Kuruniyan leaving it for Chhetri but the Indian captain volleyed it straight to the Bangladeshi goalkeeper Ashraful Islam Rana.

Bangladesh also looked to penetrate early and came close in the 31st minute when Adil Khan made a mess of a back pass as Biplo Ahmed took the control of the ball but thankfully Anas Edathodika averted the danger.

The 104-ranked India thus are yet to win against Bangladesh since 1999 when the Blue Tigers had won 1-0 in the SAFF Games.

Bangladesh stay unbeaten from three matches against India. The last two matches between the two teams, in 2013 and 2014, ended in 1-1 and 2-2 draws respectively.