Neymar struck early before Mbappe netted either side of the break and Icardi also scored to lift PSG to 42 points from 17 games. 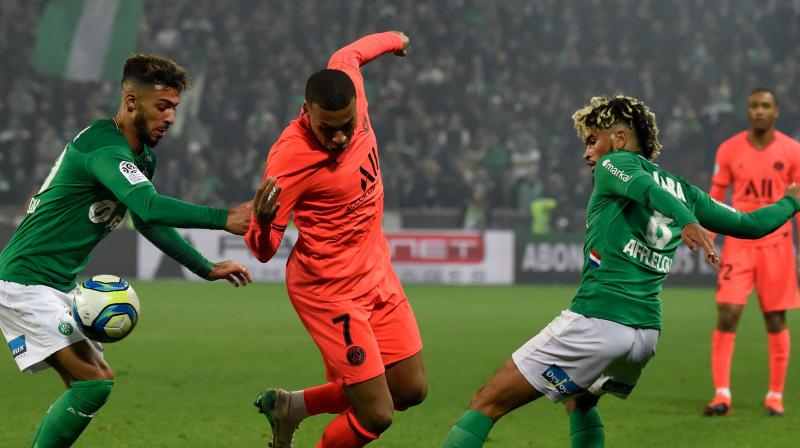 Paris Saint-Germain’s serial goal-getters Kylian Mbappe, Mauro Icardi and Neymar were at it again as the Ligue 1 leaders extended their advantage to seven points with a 4-0 victory at 10-man St Etienne on Sunday. (Photo:AFP)

PARIS: Paris Saint-Germain’s serial goal-getters Kylian Mbappe, Mauro Icardi and Neymar were at it again as the Ligue 1 leaders extended their advantage to seven points with a 4-0 victory at 10-man St Etienne on Sunday.

Neymar struck early before Mbappe netted either side of the break and Icardi also scored to lift PSG to 42 points from 17 games as St Etienne had Jean-Eudes Aholou sent off midway through the first half.

Neymar, who set up France international Mbappe for his eighth and ninth league goals of the season, missed a penalty just after the hour.

Elsewhere, Olympique Lyonnais slumped to a 1-0 home defeat against Stade Rennais and lost Memphis Depay and Jeff Reine-Adelaide to knee injuries for the rest of the season.

PSG went ahead in the ninth minute when Paredes’s 18-metre volley took a deflection off Neymar after Mathieu Debuchy had cleared the ball into Paredes’s path.

Les Verts went down to 10 men when Aholu was shown a straight red card for a dangerous tackle on Paredes.

The visitors were untroubled and Mbappe fired home from Neymar’s through ball in the 44th minute to double the tally.

Brazil forward Neymar saw his spot kick hit the post in the 62nd after he was brought down by Debuchy and Icardi netted his 13th goal in 14 games, volleying home from close range from a Layvin Kurzawa cross.

Mbappe rounded off the scoring with a clinical angled shot one minute from fulltime.

PSG have not lost a league match at St Etienne since 2008.

The result left St Etienne in 11th place, level on 25 points with eighth-placed Lyon who endured a dismal evening at the Groupama stadium.

Eduardo Camavinga scored the only goal from just inside the box with one minute left to lift Rennes up to fourth on 30 points from 17 games, five behind second-placed Olympique de Marseille who have played one more game.

Both Depay and Reine-Adelaide suffered cruciate knee ligament injuries which will keep them out of action ‘for at least six months’, Lyon said in a statement.

Netherlands international Depay is now a major doubt for the Euro 2020 finals that start on June 12.