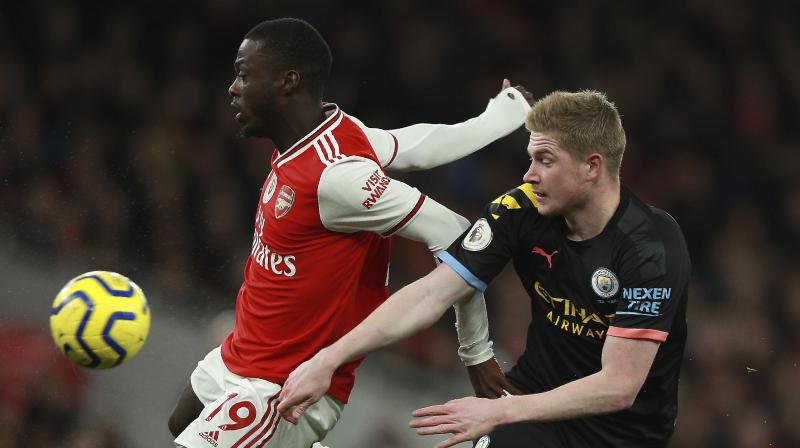 Manchester City resumed normal service in the Premier League as a masterful display by Kevin De Bruyne fired them to a 3-0 victory over a listless Arsenal at the Emirates on Sunday. (Photo:AFP)

LONDON: Manchester City resumed normal service in the Premier League as a masterful display by Kevin De Bruyne fired them to a 3-0 victory over a listless Arsenal at the Emirates on Sunday.

Belgian De Bruyne produced two sublime finishes and one silky assist for Raheem Sterling as Pep Guardiola’s City killed the match as a contest before halftime.

Arsenal managed to avoid any more punishment in the second half as City switched on cruise control but it was an uncomfortable 90 minutes for their stand-in manager Freddie Ljungberg whose side were totally outclassed.

There was no big celebration by the travelling City fans as the champions, who dropped eight points in their previous five games, remain 14 points behind runaway leaders Liverpool.

They did, however, close the gap on second-placed Leicester City to four points ahead of their clash next week.

Arsenal managed only six shots — their lowest total at home in the Premier League since 2008 — and are ninth with 22 points, seven points adrift of the top four and showing little sign that things will improve anytime soon.

Ljungberg has managed only one win from five games in interim charge since Unai Emery was sacked and midway through the season the north London club appear rudderless — as close to the relegation zone as the top four.

Impressive as City were, Guardiola said last week’s performance in losing 2-1 to Manchester United was better.

“Against United we played much better,” the Spaniard, in charge of his 200th match for City, said. “I know we are judged on the result but I have a duty to judge the performance, not just the result.”

It is now six home games without a win for Arsenal in all competitions, yet they almost took the lead in the opening minute when Gabriel Martinelli burst through.

A minute later, however, they were behind as City counter-attacked and Gabriel Jesus cut the ball back from the byline to an unmarked De Bruyne who belted a stunning side-footed finish into the roof of the net from just outside the penalty area.

City were two up in the 16th minute and again they sliced through Arsenal with alarming ease. De Bruyne swapped passes with Jesus and then picked out Sterling who was all on his own to calmly dispatch the ball past Bernd Leno.

Shortly before halftime, with Arsenal briefly down to 10 men as left back Sead Kolasinac limped off, City made it 3-0 with De Bruyne again given time and space to pick his spot, this time passing a sublime left-foot finish just inside the post.

Many Arsenal fans headed for an early halftime coffee, or perhaps home, and missed a superb save by Leno to deny the outstanding De Bruyne a first-half hat-trick, clawing the Belgian’s bending effort against the post.

City could and should have scored more after the break, despite taking their foot off the accelerator, while for a chastened Arsenal it was simply a case of damage-limitation.

The last time they experienced such a long run without a home win was 1994-95.