3 take aways from the Manchester United vs Barcelona UCL clash

Camp Nou will always hold a special place in Solskjaer's heart, but he won't regard the famous arena with as much fondness after the loss. 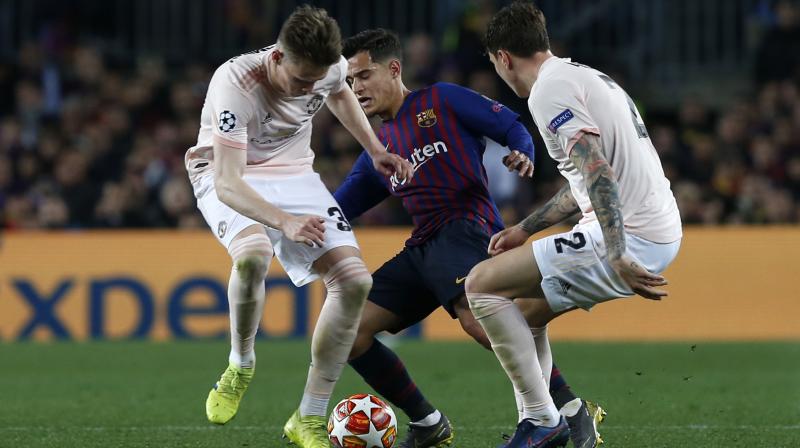 It was the first time Solskjaer had played or managed at the Camp Nou since scoring the treble-clinching winner for United in the final seconds of the 1999 Champions League final against Bayern Munich. (Photo: AP)

Barcelona: Barcelona cruised into the Champions League semi-finals as their 3-0 win against Manchester United sealed a 4-0 aggregate success on Tuesday.
Here, AFP Sport looks at three things we learned from the quarter-final second-leg clash:

No Camp Nou repeat for Solskjaer

Barcelona's Camp Nou will always hold a special place in Ole Gunnar Solskjaer's heart, but the Manchester United manager won't regard the famous old arena with quite as much fondness after this frustrating loss.

It was the first time Solskjaer had played or managed at the Camp Nou since scoring the treble-clinching winner for United in the final seconds of the 1999 Champions League final against Bayern Munich.

Twenty years after the goal he has seen a "million times" since, lightning didn't strike twice for the Norwegian. "We are confident but humble enough to know it's our hardest night of the season," he said in a prescient comment just before kick-off.

United were aiming to overturn another first-leg deficit after their epic effort in recovering from 2-0 down to beat Paris Saint-Germain on away goals in the last 16. But, crucially, Marcus Rashford hit the bar with a glorious chance to give United the lead inside 40 seconds and it wasn't long before Lionel Messi put the tie beyond Solskjaer's reach.

Lionel Messi extended his incredible record of tormenting Premier League clubs in the Champions League. Messi has now scored 24 goals in 32 Champions League games against English opponents, more than any other player in the tournament.

Accelerating away from Fred, Messi was granted too much space by United defender Chris Smalling on the edge of the area and took full advantage with a superb low shot that flashed past David de Gea in the 16th minute.

It was a sweet moment of revenge for Messi, who suffered a facial injury in the first leg after a clash with Smalling. Messi's first Champions League quarter-final goal since April 2013 ended a run of 12 games at this stage without netting.

Just four minutes later, Messi effectively clinched Barca's return to the semi-finals for the first time since 2015 with a helping hand from United keeper De Gea, whose woeful attempted save failed to stop the Argentine's weak shot slip under his body.

Messi has 45 goals in 41 games in all competitions this season, with his 10 in the Champions League making him the tournament's leading scorer in 2018-19.
With Messi on their side, it's no wonder Barca are now unbeaten in 31 Champions League home games. Liverpool remain the only Premier League club to win at the Camp Nou in 24 attempts dating back to February 2007.

Philippe Coutinho has endured a difficult time since moving to Barcelona for 142 million (USD185 million) in January 2018, but the former Liverpool forward gave a timely reminder of his quality with a stunning strike to wrap up the victory.

Substituted during Barca's recent win over Rayo Vallecano at the Camp Nou, Coutinho's disappointing form reached a new low when he was whistled by a small section of his own fans.

But the Brazilian was handed a start against United as one of Barca's front three instead of Ousmane Dembele, who has just recovered from a hamstring injury, and at last he showed a glimpse of the talent that made him such a favourite of United's rivals at Anfield.

With Barca already well on the way to the last four by the 61st minute, Coutinho had nothing to lose when he unleased a majestic curling effort that raced into the top corner from 20 yards.

Coutinho seized the opportunity to emphasise that he won't be affected by the doubters, celebrating the goal by sticking his fingers in both ears while staring at the crowd in a defiant gesture.