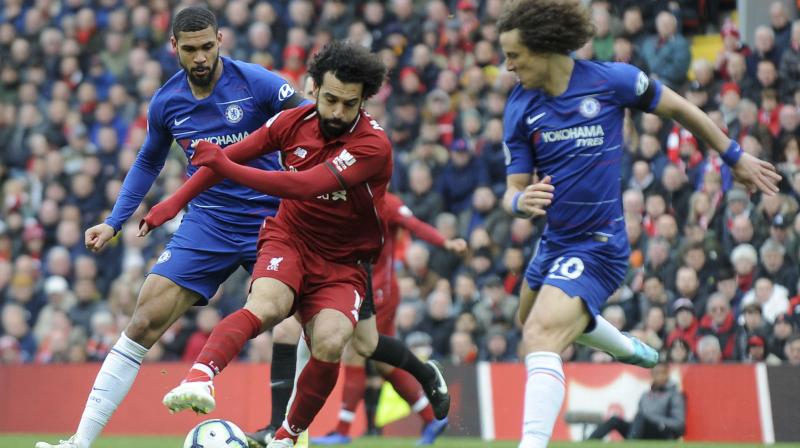 a smoke device was thrown into the away section during the second half and we are actively working with Merseyside Police to investigate the matter. (Photo: AP)

Liverpool are working with Merseyside Police to find and ban the supporter who threw a flare into the away fans section during Sunday’s clash against Chelsea, the Premier League club said on Tuesday.

Police confirmed on Monday that a flare was thrown from the upper section of the Anfield Road Stand and landed on the away supporters below after Sadio Mane put Liverpool 1-0 up six minutes into the second half.

Nobody was injured in the incident, but a young Chelsea fan suffered a panic attack.

Liverpool thanked the Chelsea staff, officials and supporters for their “compassionate marking” of the 30th anniversary of the Hillsborough disaster, in which 96 Liverpool supporters were killed.

“As ever, the overwhelming majority of those present at Anfield ensured the occasion was a fitting tribute,” a Liverpool spokesperson said.

“Regrettably however, a smoke device was thrown into the away section during the second half and we are actively working with Merseyside Police to investigate the matter.

“Any person found to have committed this offence will be banned from our ground.”

The Merseyside club also responded to the use of an offensive chant during the game, which Liverpool won 2-0 to return to the top of the league standings.

“The club is also concerned about a chant from some of our fans, specifically referencing Chelsea, as inappropriate and offensive,” the spokesman said.

“We would urge all Liverpool supporters to respect each other and stop such chants as they do not reflect the inclusivity that the club stands for.”