Sports   Football  17 Apr 2019  'We could have scored a few more in the second half', says Frenkie De Jong
Sports, Football

'We could have scored a few more in the second half', says Frenkie De Jong

The victory was secured by a second half header from 19-year-old captain Matthijs de Ligt. 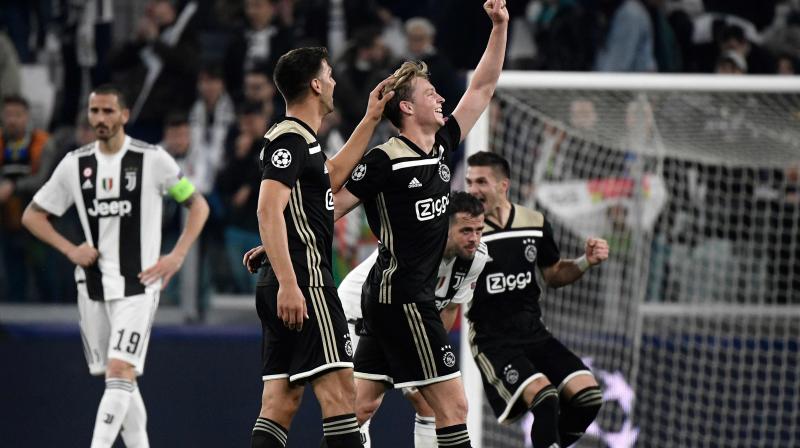 The 3-2 aggregate win ensured unlikely semi-final qualification for the Dutch club who have come all the way through the preliminary rounds of the competition. (Photo: AFP)

Turin: Ajax Amsterdam basked in widespread praise after their Champions League heroics but their young players believe the 2-1 away win over Juventus in the second leg of the quarter-final should have been more emphatic.

“We could have scored a few more in the second half,” said midfielder Frenkie de Jong, one of the heroes of their triumph in Turin which was characterised by some sweeping passing play.

The 3-2 aggregate win ensured unlikely semi-final qualification for the Dutch club who have come all the way through the preliminary rounds of the competition.

“In the first half they had a bit more control,” De Jong said of Juventus’ early showing as Cristiano Ronaldo put his side ahead in the 28th minute but Donny van de Beek levelling six minutes later.

“Their 1-0 lead was not exactly undeserved but luckily for us we were able to get back to 1-1 quickly after that.

“But after the halftime break, we were so much better than them. We wasted a lot of good chances and we should have been much more in the lead,” the Barcelona-bound 21-year-old told reporters.

Van de Beek agreed the victory margin should have been bigger.

“We should have won 4-1. On the basis of our second half showing it was a deserved victory,” said the midfielder, who turns 22 on Thursday.

The victory was secured by a second half header from 19-year-old captain Matthijs de Ligt, who was not even born the last time Ajax reached the Champions League semi-finals, losing 2-6 on aggregate to Juventus in 1997.

“It’s the first time I’ve witnessed such success for Ajax and the fact that I’m was actually on the field and part of it, I find it bizarre,” the skipper said.

“We are now in the semis having knocked out another of the teams favoured to win the title. We’ll see where it all ends but we know what we can do and we let everyone else see it again too.”