As it poured at the closing ceremony of the football World Cup, Putin’s umbrella became the butt of Twitter jokes. 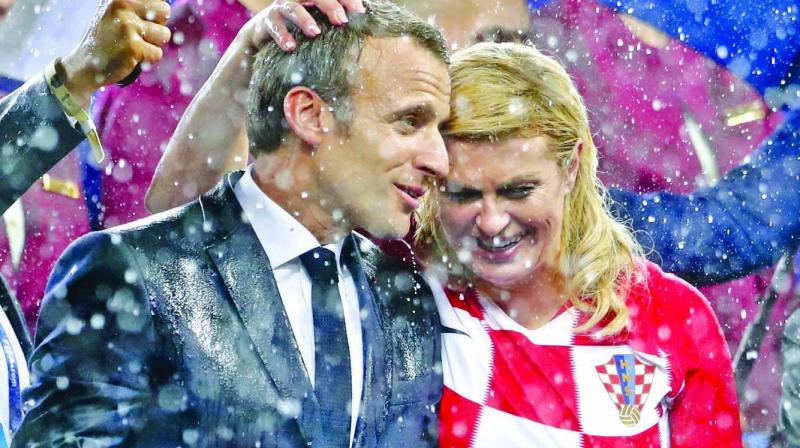 The bonding between winner and loser provided touching moments on the podium.

France won the World Cup. Vladimir Putin’s golf umbrella stole the show. But it was Emmanuel Macron and Kolinda Grabar-Kitarovic who won hearts at the closing ceremony. It was pouring cats and dogs and everyone on the podium, including the Air Qatar stewardesses, took it on their chin like soldiers.

It was the umbrella that became the hot topic with the twitterati wondering if there was only one umbrella in the whole of Russia. All the praise was for Macron and Kolinda and the FIFA honcho Gianni Infantino for not behaving like VIPs while standing only a metre away from Putin.

Just imagine the scene had this final been in India and everyone would have been scrambling for umbrellas for the VVIPs and causing utter chaos on the podium. Out in Moscow, Putin’s aides whipped out one umbrella quickly for the boss while it took them much longer to get more umbrellas on to the dais. Before then, a thoroughly wet Macron had greeted every French player with a hug after they had had their medal awarded to them by a ‘dry’ Putin. 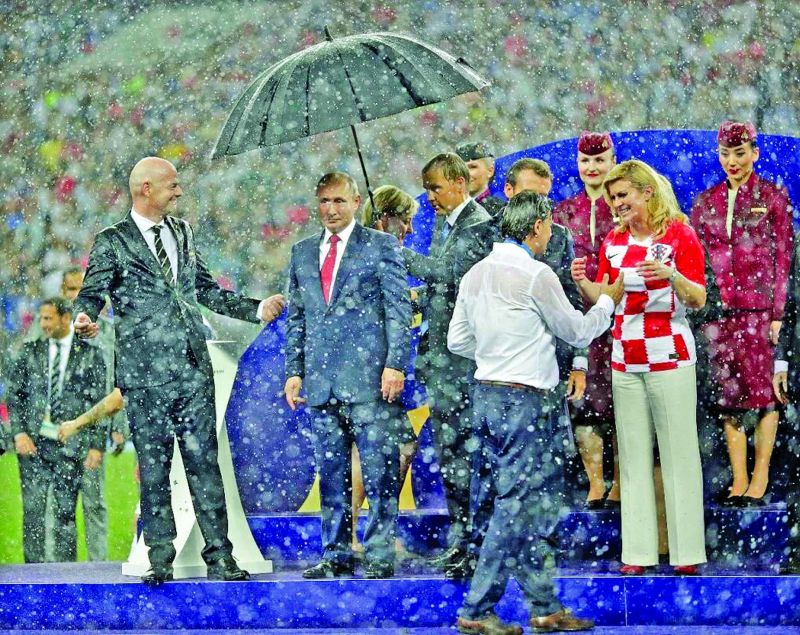 Kolinda had a hug for each of her Croatian heroes who had fought valiantly. Her gesture in wiping the tears off the face of star striker Modric was the most poignant moment of the ceremony. Kolinda’s social media fans would have zoomed in thousands after that gesture.

“Kolinda, President of Croatia, a woman of sheer class! Cheered her country’s football team all the way to the final then stood in pouring rain congratulating and consoling each player...while Vladmir Putin had a giant umbrella keeping him dry” said Lybda Kirk in her tweet with a hashtag reading #howleadershouldbehave. She probably captured what took place best as the non-VIPs showed up Putin on that historic podium.

Putin was trolled but the Russian leader, who was to fly away Monday morning for his summit with US President Donald Trump, may have had weightier matters on his mind.  However, it was the contrast between the global VVVIP Putin and the other European VIPs with him on the podium that told a tale about behaviour in high places.

The manner in which Macron and Kolinda bonded with no difference showing between winner and loser on the podium was a pointer to their classiness too. Of course, at the moment of triumph when the long whistle blew, Macron could be allowed his gesture in raising his hands in victory.