The inspired Ginter broke the deadlock in the 41st minute with a clever backheel. 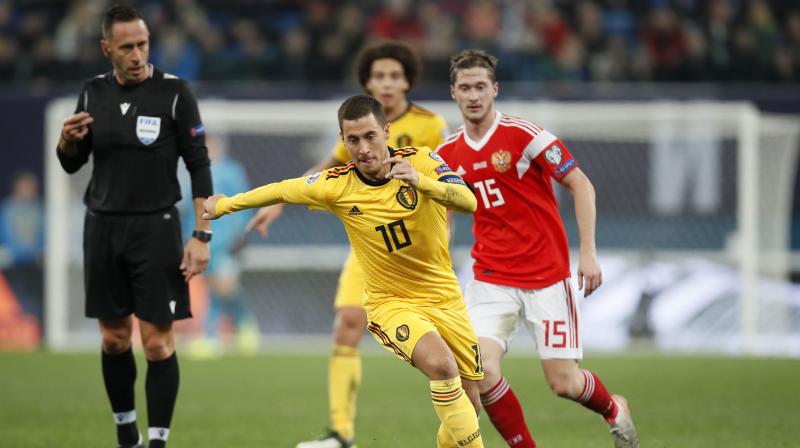 Defender Matthias Ginter scored one goal and was involved in two more as Germany comfortably saw off Belarus 4-0 on Saturday to clinch their place at Euro 2020, qualifying for the finals for a record 13th time in a row. (Photo:AFP)

Monchengladback: Defender Matthias Ginter scored one goal and was involved in two more as Germany comfortably saw off Belarus 4-0 on Saturday to clinch their place at Euro 2020, qualifying for the finals for a record 13th time in a row.

The inspired Ginter broke the deadlock in the 41st minute with a clever backheel, provided a dummy which allowed Leon Goreztka to score the second and the pass for Toni Kroos to add the third.

Germany goalkeeper Manuel Neuer saved a penalty from Igor Stasevich in the 75th minute and Kroos added a fourth to complete his first national team brace since the 7-1 World Cup semi-final win over Brazil in 2014.

Group C leaders Germany were given a helping hand by arch-rivals the Netherlands who held Northern Ireland 0-0 away to ensure the Dutch and Germans qualified with one match to spare.

Germany have 18 points —- from six draws and one defeat — while the Dutch have 16 and Northern Ireland 14.

Belarus have four points but could still qualify as they have reached the playoffs of the Nations League which offers four more places.

“I’m satisfied, there were some very good passing exchanges,” said coach Joachim Loew, who took over in 2006 and will be in charge at his seventh major tournament.

“We did a good job. All in all, I’m very satisfied. Kroos is extremely important for the team, he’s always ready to play, always keeps his cool - he’s elementary for such a young team. He does that very well.”

As expected, Germany quickly took control although their early attacks were somewhat predictable.

They were given a fright when Stasevich’s dipping long-range shot forced Neuer into a difficult save and they went ahead shortly afterwards.

Serge Gnabry wriggled past his marker and fired a low ball across the face of goal which was flicked in by Ginter for his first Germany goal on his 29th appearance.

Germany increased their lead four minutes after halftime when Kroos sent a low corner to the edge of the area, Ginter dummied and Goretzka fired home.

Six minutes later, Ginter’s pass found Kroos on the edge of the area and he swept the ball home with a trademark first-time shot.

Belarus were awarded a penalty when Robin Koch tripped Pavel Nekhaychik but Neuer dived to his right to save Stasevich’s spot-kick. Kroos rubbed it in when he collected the ball in the area, spun past his mark, evaded another and fired a low shot past Aleksandr Gutor to complete the rout.