Both the sides had their chances with favourites Bengaluru having most of them but couldn’t find goal in the regulation time. 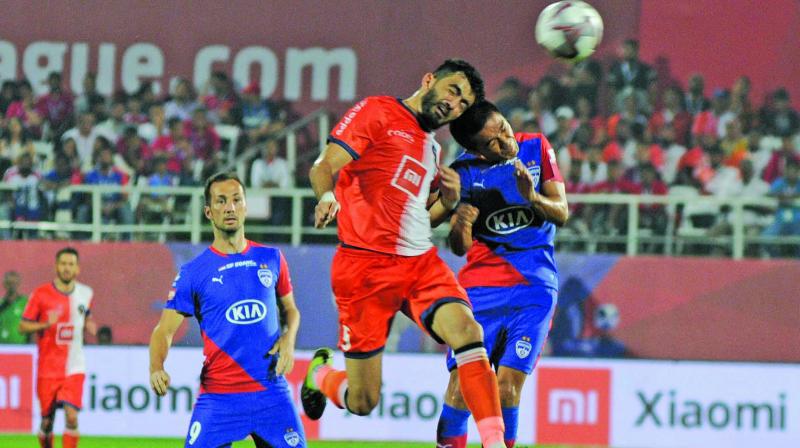 Last time in Mumbai another Indian player Rafique had scored winner for ATK in the inaugural final against Kerala Blasters.

Both the sides had their chances with favourites Bengaluru having most of them but couldn’t find goal in the regulation time. The game went into 30 minutes extra time. Goa were reduced to 10 men after 15 minutes of extra time after their Moroccan defender Ahmed Jahouh recieved second booking.

After showing attacking brand of football throughout their campaign Goan coach Sergio Lobera and Bengaluru’s gaffer Carles Cuadrat were in no mood to take any risks in the title match.

Bengaluru had first sniff after the start of play, with their Venezuelan striker Nicolas Feder (Miku) in charge but goalkeeper Naveen Kumar was alert to move in time and grab the ball.

Incidentally. Miku had the best chance of the match in the 81st minute but was denied by woodwork. Udanta Singh sent a cross for Sunil Chhetri who chested it to Francisco Hernandez (Xisco) and the Spnaish midfielder back heeled to Miku who placed it with left foot but found the upright.

Cuadrat had said before the game that his team would have liked to play final in front of bigger capacity stadium. Mumbai Football Arena with around 9,000 capacity wasn’t even fully packed with 7,372 spectators in the house, many of them travelling fans from Goa and Bengaluru.

FC Goa defender Jahouh released a couple of long balls as both sides seemed to rely on high balls to break each others resolute defense. Later Goa survived tense moments with Miku lurking in dangerously.

Star strikers from both sides Ferran Corominas (Coro) and Miku sufferend nasty blows and were heavily marked. Goa’s Mourtada Fall got first booking for mistimed tackle on Miku and later Goa skipper Mandar Rao pulled hamstring while making a run from the left.  He could continue just for one minute before Saviour Gama replaced him towards the end of first half..

Both sides continued to show respect for each other mixing caution with aggression in the second half. Goa found some footing upfront after ten minutes into second half.