'I’m not happy to play the second role', says Giroud after getting sidelined

When asked whether he has already had offers to go elsewhere, Giroud added: 'Yes but I won’t tell you. The priority is Chelsea.' 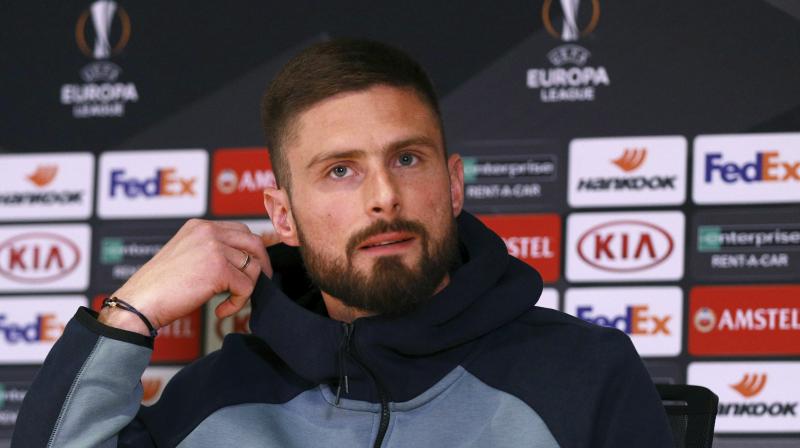 The 32-year-old Frenchman has started just seven Premier League games this season and has seen limited opportunities since the arrival of Gonzalo Higuain. (Photo: AP)

Chelsea striker Olivier Giroud said he has been approached by other clubs to play for them next season but wants to extend his stay at Stamford Bridge if manager Maurizio Sarri can offer regular first-team opportunities.

Giroud, who is the top scorer in the Europa League with nine goals, is out of contract at the end of the campaign, although Chelsea have an option to extend it for another 12 months.

The 32-year-old Frenchman has started just seven Premier League games this season and has seen limited opportunities since the arrival of Argentina international striker Gonzalo Higuain in January.

“Trust me I’m very frustrated when I’m not on the pitch, but I just don’t want to show it,” Giroud told a news conference ahead Chelsea’s Europa League quarter-final second leg against Slavia Prague on Thursday.

“You need to keep that frustration for you. And transform that into positive energy on the pitch.

“I’m not happy to play the second role. That’s why I said next year I will need to have a more important role to play in the team.”

When asked whether he has already had offers to go elsewhere, Giroud added: “Yes but I won’t tell you. The priority is Chelsea.

“With what I’ve achieved here, there is no reason they won’t give me one more year. But I need to be happy, also.”

Chelsea hold a 1-0 advantage over Slavia from the away leg, courtesy a late headed goal by defender Marcos Alonso.

They will be without defender Antonio Rudiger, who limped out of Sunday’s 2-0 league defeat against Liverpool at Anfield with a knee injury.

However, Chelsea’s assistant coach Gianfranco Zola expects the German international to return for the league trip to top-four rivals Manchester United on April 28.

“It looks not as bad as we thought, luckily. When he came off limping, we were worried,” Zola said.

“Yes, there is a strong possibility that we see him (against United). He’s a warrior and won’t want to miss a game like that. The next few days will be very important to see if he can continue recovering.”