'In the last third of the season you see the finish line already but you need a little bit of luck with injuries', admitted Klopp 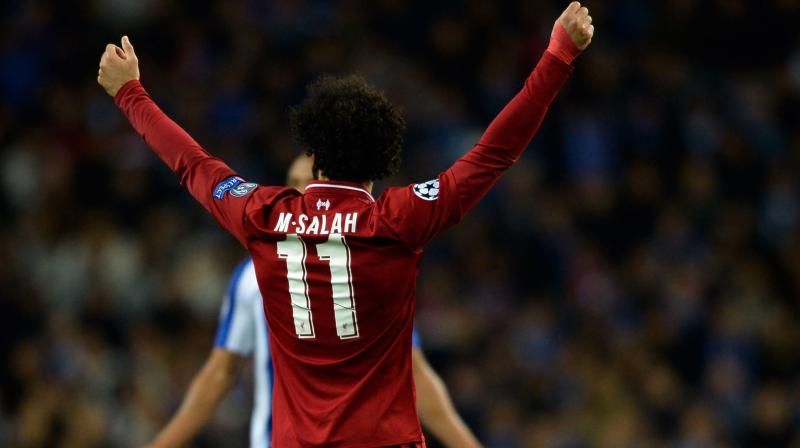 Liverpool have the momentum as they dream of winning the league and the European Cup in the same season, something they last achieved back in 1984. (Photo: AFP)

Porto: Jurgen Klopp might be steeling himself for some sleepless nights as he tries to work out how to stop Lionel Messi, but for now, the German can be delighted at seeing his Liverpool side extend their outstanding record in European ties under his management.

Having won 2-0 at home in the first leg, Liverpool always knew that an early away goal in the second leg of their quarter-final against FC Porto at the Estadio do Dragao would effectively kill the tie.

So it proved, as after surviving a barrage of early pressure in northern Portugal on Wednesday, Sadio Mane's 26th-minute strike broke Porto's hearts and set Liverpool on their way to a 4-1 win on the night.

Having won 3-1 at Bayern Munich in the last round, here was another statement away victory for the Anfield club after they lost all three matches on the road in the group stage.

He has only been stopped in finals, against Sevilla in the Europa League in 2016 and Real Madrid in last season's Champions League.

"I know people like to be disrespectful to a team like Porto, but we knew how difficult it is and we won 2-0 at home, it was deserved, and here anything could have happened," Klopp said.

"We dealt really well with it. In the quarter-finals there are only unbelievably strong teams."

The former Borussia Dortmund boss knows the same applies in the semi-finals, where last year's runners-up face the daunting prospect of Messi and Barcelona.

Having been at home first against Bayern and Porto, the Reds will head to the Camp Nou for the first leg on May 1.It is six years since Barca lost at home in the Champions League, but Liverpool need to ensure they remain in the tie before the return at Anfield on May 7.

"It is our dream. Every single player wants to play this kind of game in their lives," admitted Mane, yet Klopp will have to come up with a plan to deal with the brilliant Messi.

"Thank God I don't have to think about that tonight," Klopp joked on Wednesday.

"I have a few more nights to think about that. Everybody tried it so far and nobody can do it. We still will try it. We are looking forward to it but we have so many jobs to do before we meet Barcelona. Let's first play these games and then let's prepare Barcelona."

The focus now reverts back to the Premier League, with Liverpool two points clear of Manchester City at the summit having played a game more.

By then they could be behind Pep Guardiola's City side, who will look to avenge their incredible Champions League defeat against Tottenham Hotspur when they play the London club again on Saturday.

Despite the games coming thick and fast, Liverpool emerged from their trip to the Estadio do Dragao in great shape.

Klopp rotated his squad, with Divock Origi making a rare start while Roberto Firmino and Jordan Henderson were only used as substitutes.

In addition, Joe Gomez came off the bench for his first top-team appearance since suffering a leg fracture in December.

"In the last third of the season you see the finish line already but you need a little bit of luck with injuries," admitted Klopp.

"We play again in three days, so we fly tomorrow and make ourselves ready for another intense football game." Cardiff boosted their survival hopes with a 2-0 win at Brighton and Hove Albion on Tuesday. "Cardiff is completely back in the race with that result so they will fight for it."

However, after this latest victory which is their eighth in a row, Liverpool have the momentum as they dream of winning the league and the European Cup in the same season, something they last achieved back in 1984.