Victory would have put PSG out of reach at the top of the standings with six games left. 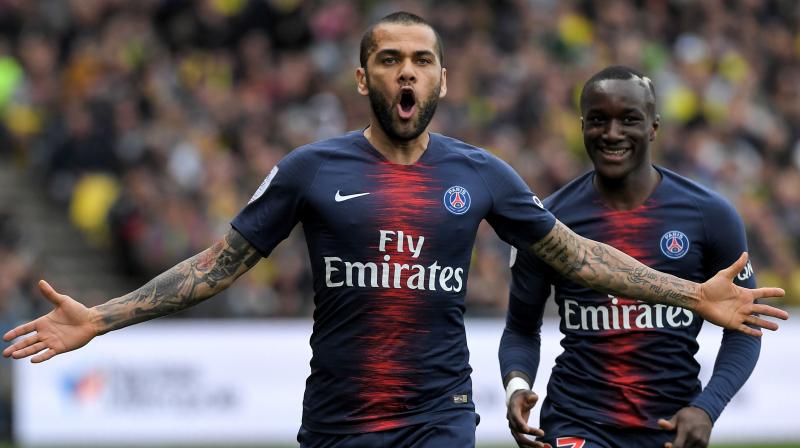 It was an embarrassing performance from runaway leaders PSG, who have 81 points from 32 games and lead second-placed Lille by 17 points. (Photo: AP)

Paris: Paris St Germain missed another opportunity to seal their eighth Ligue 1 title when their much-changed side were beaten 3-2 at strugglers Nantes on Wednesday.

Victory would have put PSG out of reach at the top of the standings with six games left, but Dani Alves’s opener was cancelled out by Diego Carlos before Majeed Waris and an own goal by Alves gave the Canaries all three points at La Beaujoire.

PSG’s Metehan Guclu reduced the arrears a minute from fulltime in his maiden Ligue 1 appearance.

It was an embarrassing performance from runaway leaders PSG, who have 81 points from 32 games and lead second-placed Lille by 17 points.

Thomas Tuchel’s side, who have now picked up only one point from their last three Ligue 1 outings, will be crowned champions on Sunday if they beat Monaco at home.

PSG were without the injured Neymar, Edinson Cavani, Thiago Silva, Marquinhos and Thomas Meunier, a situation that led the German coach to complain about the lack of depth of his squad last weekend.

Marco Verratti and Juan Bernat were suspended while Kylian Mbappe and Angel Di Maria were rested ahead of Sunday’s league game against Monaco and the April 27 French Cup final against Stade Rennes.

Their firepower was sorely missed as Eric Choupo-Moting barely threatened throughout, apart from when he hit the post in the second half.

Alves, however, opened the scoring after 19 minutes with a splendid long-range lob after collecting a cross from Leandro Paredes.

Waris put the hosts ahead a minute before the interval when he deflected a team mate’s shot past Gianluigi Buffon.

Nantes doubled their advantage six minutes into the second half as Carlos’s attempt form a corner deflected in off Alves.

Guclu, 20, celebrated his first top flight appearance by finding the net with a fine low shot from inside the box.

The result lifted Nantes up to 14th on 37 points, 12 above the relegation zone.