A tongue dripping semi final match awaits between Barcelona and Liverpool, who both have won the elite European club trophy five times. 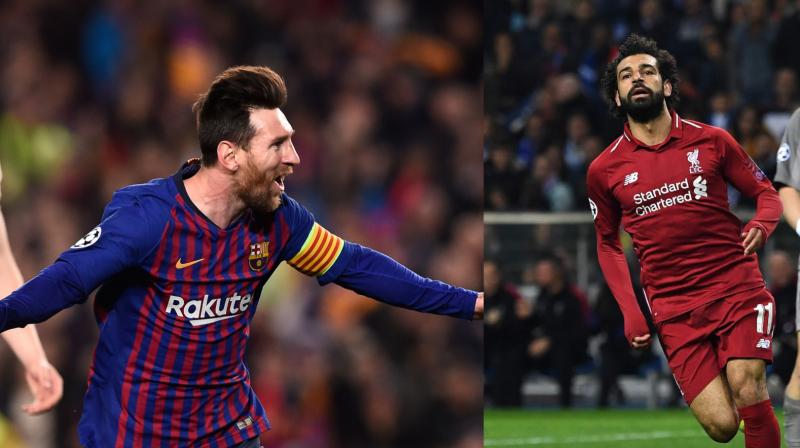 Following the match setup, the Twitteratis especially the football maniacs, can’t seem to control themselves as they took to twitter to share their opinions and views on the semi-final match. (Photo: AFP)

Mumbai: The Champions League is nearing its end, and with that the matches are also getting more intriguing. A mouth watering semi-final clash has been set up between Barcelona and Liverpool, after both knocked their oppositions out of the Champions League.

A Sportkeeda article states, Liverpool secured their semi-final berth after thrashing Porto 4-1. The visitors won both the legs by an aggregate of 6-1, previously the Reds won their first leg after Naby Keita, and Roberto firmino netted goals inside the first-half.

In the second leg, the Portuguese side were completely outplayed as Sadio Mane, Mohamed Salah, Roberto Firmino and Virgil van Dijk all struck goals to help Liverpool advance to another semi-final. However, Porto’s Militao's netted a lone goal in the 68th minute to provide some consolation for the home side.

With this win Liverpool marked their second consecutive semi-finals on the trot. The last time the Juergen Klopp-led side reached the semi-final was during the last season. Meanwhile, on the other hand Barcelona eased past the 20-times Premier League champions Manchester United with an aggregate victory of 4-0.

During the first leg, the Catalan side struggled hard to net a single goal, but were helped by an owl goal from Luke Shaw. The Luke Shaw-led own goal was enough to hand the visiting side an upper hand. In the second leg, United failed to impress as Messi scored his brace to take the match away from the Red Devils.

Not to mention Philippe Coutinho, who also scored to help the Catalans win the home game by a margin of three goals. Lack lustre United hardly produced any positive impact on the second leg, hence letting the Valverde-led side to advance to the semis with ease.

Now that both the clubs have won their last eight legs, a tongue dripping semi final match awaits between Barcelona and Liverpool, who both have won the elite European club trophy five times. Following the match setup, the Twitteratis especially the football maniacs, can’t seem to control themselves as they took to twitter to share their opinions and views on the semi-final match.

Liverpool vs Barcelona inject that straight into my veins 💉💉💉

SHOVE SOME VAR IN WHILST YOU’RE AT IT!!!#LFC #YNWA #PORLIV

Ajax, Liverpool, Spurs and Barcelona in the Champions League semi-finals.

Barcelona - Liverpool it is, that’s clear now. What a bloody Semi-Final this is going to be. I honestly can’t wait to see it.

English clubs have played 42 games against Barcelona at the Camp Nou in European competitions.

Only twice have they come away with wins.

Liverpool have played four times at the Camp Nou against Barcelona:

Plenty of “what if the Scouse win the league” questions but nobody’s gonna mention the possibility of an even worse scenario - they win both.

For the first time since his move to Barcelona in 2014, Luis Suárez will come back to his beloved Liverpool to face them in the semifinals of the Champions League.

This will be an incredible game with mixed emotions. pic.twitter.com/cyBOE2oOBO

Media:
"Liverpool's full concentration will be on winning the Premier League."
"They don't have the squad to compete on multiple fronts like Man City."
"Being knocked out of Europe may help them in the league"