Son Hueng-min ensured that Tottenham advance to the semi-finals, and don’t suffer due to Harry Kane’s absence. 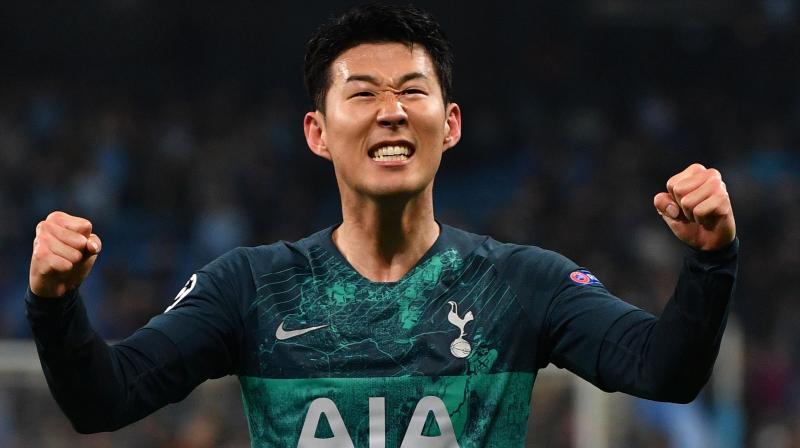 Raheem Sterling opened the account of Manchester City in the second leg, but the lead didn’t last long as Tottenham equalized immediately with the help of Son Hueng-Min’s strike. (Photo: AFP)

As per an article by Sportskeeda, UEFA Champions League witnessed one of the most thrilling games of this season, as Tottenham advanced to the semi-finals by defeating 4-4 on aggregate.

Tottenham was successful in acquiring 1 goal lead in the first leg, with the only goal scored by Son Heung-min. Though City was triumphant in the second leg by beating Tottenham 4-3, Tottenham went through due to their three away goals.

Raheem Sterling opened the account of in the second leg, but the lead didn’t last long as Tottenham equalized immediately with the help of Son Hueng-Min’s strike.

Son doubled his tally in the 10th minute as he scored a wonderful curler past Ederson. Bernardo Silva came to the rescue for City as he deflected one past Lloris.

Raheem Sterling has been in a sensational form this season, and he proved it yet again by scoring his second goal as Kevin De Bruyne assisted him with a superb pass.

All the four scored were scored in a span of 21 minutes from the start of the game.

came back strong in the second half, as Aguero was successful in finishing one past the net. Kevin De Bruyne was a key player for as he completed his hat-trick of assists with his pass to Aguero.

It was all going good for City till Fernando Llorente’s goal was given by VAR. Spurs were successful in scoring one more away goal due to Llorente’s controversial goal.

Son Hueng-min ensured that Tottenham advance to the Semi-finals, and don’t suffer due to Harry Kane’s absence.

Here are some of the best tweets from vs. Tottenham game:

Raheem sterling when De Bruyne gets the ball #MCITOT pic.twitter.com/DZn7qhmp5M

21 minutes is a record for the fastest 5 goals in a game in Champions League history. Previous record was 24 minutes: Dortmund v Legia Warsaw.

This game has been brought to you by the Away Goals Rule.

Anyone else concerned for their health right now?! #mancity

How do you feel after watching Man City vs. Spurs?

Football you are amazing, cruel, heart breaking, incredible, unbelievable, totally mental. VAR, you have heightened all football fans’ emotions by 1,0002827390. What a game at the Etihad!! Congratulations Tottenham 👏🏽👏🏽 #MCITOT

- Spent no money in the last year

- Had to deal with moving stadiums

And now he's got them into a Champions League semi-final!

Build that man a statue.

One of those days that you feel genuinely sorry for people who don’t like football. That was sensational #MCITOT