Now the pair will meet again on Saturday at the same venue in the Premier League, with plenty at stake for both teams. 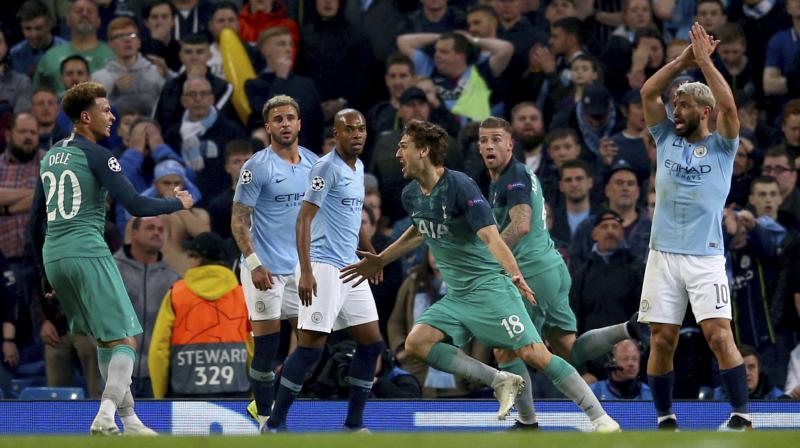 Spurs, who won the first leg 1-0 and progressed after the tie finished 4-4 on aggregate, will play Ajax Amsterdam for a place in the final against Liverpool or Barcelona. (Photo: AP)

Manchester: After an astonishing encounter at the Etihad Stadium, Tottenham Hotspur reached the semi-finals of the Champions League on away goals following a 4-3 defeat to Manchester City on Wednesday.

Spurs, who won the first leg 1-0 and progressed after the tie finished 4-4 on aggregate, will play Ajax Amsterdam for a place in the final against Liverpool or Barcelona after one of the most remarkable matches in the competition’s history.

Tottenham manager Mauricio Pochettino predicted the meeting with the exciting and young Dutch side would be an “open and exciting game” but it will take something for it to offer more entertainment than this non-stop wave of drama and emotions.

It started in manic fashion with four goals in the opening 11 minutes of the game. It was a gripping spectacle right up until the dramatic finale when City had a stoppage time goal from Raheem Sterling, which would have sent them through, ruled out for offside after a VAR review.

City fans had celebrated what looked like the goal that sent them into the last four before the replay confirmed that Sergio Aguero was offside in the build-up.

It was a perfect example of the benefits of using technology but it was also hard on Pep Guardiola’s side who had been the stronger over the 90 minutes.

“It is cruel but it is what it is and we have to accept it,” said Guardiola, whose dream of winning four titles this season is now over.

His counterpart, Pochettino, who was without his top scorer Harry Kane, said his team had shown all their character.

“My players are heroes. We made history,” said the Argentine, whose team reach the last four for the first time since the creation of the Champions League and since their 1962 appearance in the semi-finals of the European Cup.

The contest exploded into life in the fourth minute when Sterling put City in front, receiving a ball from Kevin De Bruyne on the left flank and then cutting inside onto his right foot before beating Hugo Lloris with a beautiful, curling shot into the far corner.

Laporte was also at fault for Spurs’ second in the 10th minute when he gifted the ball to Lucas Moura, the Brazilian feeding Christian Eriksen who found Son, the brilliant South Korean finishing superbly into the far corner.

There was no respite as City responded immediately as Aguero fed Bernardo Silva and the Portuguese winger’s left-foot shot deflected off Danny Rose and beat the wrong-footed Lloris to make it 2-2 on the night.

The dangerous Sterling struck again in the 21st minute to level the aggregate score, ghosting in at the back post to convert a low cross from De Bruyne that had zipped across the face of the goal.

A thundering strike from Aguero in the 59th minute put City in the driving seat again — the Argentine blasting in at Lloris’s near post after a magnificent burst forward and perfectly weighted and timed pass from De Bruyne.

City, who went out at the same stage to Liverpool last season, were stunned though in the 73rd minute when Spurs substitute Fernando Llorente bundled in a Kieran Trippier corner to restore the London club’s advantage through away goals.

With officials unsure if the ball had bounced off the Spaniard’s hand or rolled off his hip in the goalmouth scramble, VAR was called into action and the goal stood for Spurs — a decision Guardiola questioned after the game.

Then came the stoppage time video torture for the home support — Aguero burst down the right flank and delivered a low cross for Sterling to slot home what would have been his hat-trick goal.

The VAR call was correct and the Premier League champions were out — to the delight of Pochettino and his players who celebrated wildly in front of the travelling Spurs support.

“They deserve a lot of praise. I am so happy because the effort is massive from the squad who have lived with everything. If we have one thing to describe this team, we always keep the same spirit, ideas and philosophy and that is the most important thing,” Pochettino said.

Now the pair will meet again on Saturday at the same venue in the Premier League, with plenty at stake for both teams.

It should be another classic but it is hard to see how it could be quite as engrossing as this one.