Wadoo to start his own football school

Wadoo still has one month contract left with FC Pune City and his aim remains to coach an ISL franchise. 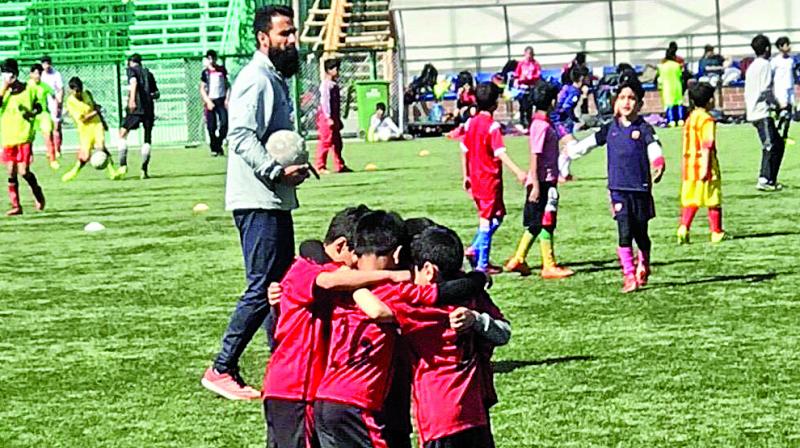 The former India and Mumbai City footballer says he knows the pulse of Indian football and can give back to the game through this ‘small’ initiative in Vashi.

After playing professional football for more than a decade and half, Mehrajuddin Wadoo wants to give back to the game by opening Wadoo’s Football School of Excellence in Vashi. The 35-year-old who started his professional journey with HAL, Bangalore in 2002-03 season hung his boots last year as a player after appearing for Indian Super League franchise Mumbai City FC.

Wadoo also earned 32 appearances for India, mostly under English coach Bob Houghton and interestingly his last I-League team was now disbanded Mumbai FC. He also played for FC Pune City and was a champion with Chennaiyin FC in the second season of ISL.

He is currently FC Pune City’s academy coach and led their Under-18 team to MDFA Super Division title recently. Wadoo has already started a football revolution in his native state Jammu and Kashmir by devising program for State Football Academy which has branches through out the Valley.

“To open my own football academy was always in my mind. After I retired as a player last year, I started working on it. I have played a lot football in Mumbai and I know the state of football in the city and outskirts. I was working in Vashi for Pune City Academy just recently and that’s where my idea turned into reality,” said Wadoo who has done his AFC A License course in coaching.

“Some coaches in Mumbai will run the academy. I will be Director of the school and will devise program besides training the coaches. A renowned Spanish club has also approached me for a possible tie-up and it is going to be big thing if at all it happens. I am travelling to Europe next month for the negotiations and if all works well then they will help in devising the course and send their coaches off and on,” he added.

Wadoo is confident that despite mushrooming of foreign and indigenous football schools and academies in the city he will be able to carve his own niche. “My school will be like Bhaichung Bhutia Football Schools. Initially I will start with one branch in Vashi and make it residential afterwards. Later we will spread all over. I played for Indian national team I know potential and roots of Indian kids. I have experience of playing for so many years and I know how to train Indian players. Let people believe in Indian coaches also sometimes,” Wadoo said.

The former utility player feels his experience of playing football throughout India and in Mumbai lately will help him in his new endeavour.

“I saw a lot of players in Mumbai who have potential and want to excel. I had successful stint with Pune City and many kids wanted to coach under me but I couldn’t incorporate them. But now I can include them all by starting my own football school in Mumbai. We announced it yesterday on social media and we are getting good response already,” said Wadoo who received best wishes from legendary footballer Bhutia himself.