Spain forward Rodrigo Moreno gave the visitors the lead against the run of play in the 74th minute of the Group H game. 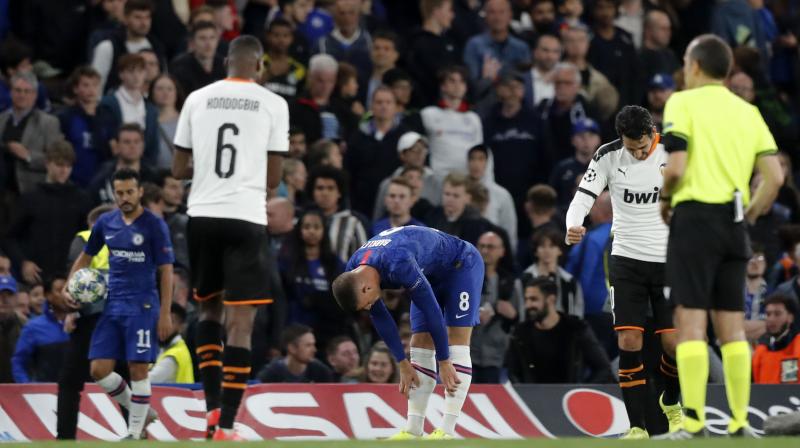 Valencia spoiled Frank Lampard’s managerial debut in the Champions League by earning a morale-boosting 1-0 win at Chelsea on Tuesday after Ross Barkley spurned a chance to equalise by missing from the penalty spot. (Photo:AP)

London: Valencia spoiled Frank Lampard’s managerial debut in the Champions League by earning a morale-boosting 1-0 win at Chelsea on Tuesday after Ross Barkley spurned a chance to equalise by missing from the penalty spot.

Spain forward Rodrigo Moreno gave the visitors the lead against the run of play in the 74th minute of the Group H game, getting the slightest of touches on a free kick from Dani Parejo to send the ball into the roof of the net.

Chelsea continued to threaten and were awarded a penalty after a VAR review spotted a handball by Valencia defender Daniel Wass.

But Barkley sent the resulting spot kick on to the crossbar and over and Europa League holders Chelsea fell to their first home defeat in European competition since losing to Paris St Germain in March 2016.

“We had a fair few chances and then the penalty, which we miss. We have to keep our heads up. There is a long way to go and this is a lesson that teams at this level can hurt you.”

Lampard became the first Chelsea manager to lose his debut Champions League match in charge –- 10 of the previous 11 had won, while Gianluca Vialli drew with AC Milan in 1999.

Valencia travelled to London reeling from a stinging 5-2 league loss at Barcelona in coach Albert Celades’s first game in charge after the much-loved Marcelino was sacked, despite overseeing two top-four finishes and winning the Copa del Rey.

His dismissal bewildered the players, who began a media blackout after the decision, while influential defender Ezequiel Garay fiercely criticised the move in an angry post on social media.

But the Spanish side leave the English capital emboldened and with three points after producing a solid, professional display and celebrating their triumph with their small band of travelling supporters tucked in a corner of Stamford Bridge.

“It’s difficult to forget about everything that has happened but I thank the players for welcoming me and their professionalism,” coach Celades said.

“We are going to get back to normality little by little and I was hugely impressed by the effort we put in today. It was not the ideal situation but we have tried to close ranks and look forward.”

Lampard’s side went into the game in confident mood after beating Wolverhampton Wanderers 5-2 in the Premier League on Saturday and their supporters belted out the manager’s name in his first Champions League game as a coach, after he won the competition in 2012 as a Chelsea player.

Visiting goalkeeper Jasper Cillessen was forced to make a pair of impressive saves to prevent the Londoners from taking the lead, turning away a powerful strike from Willian right before halftime.

The Dutchman then twice thwarted Marcos Alonso, parrying a low free kick early in the second half and tipping another set-piece effort from the Spaniard over the bar in stoppage time.

Chelsea were also dealt a setback with an ankle injury to in-form midfielder Mason Mount, who had to be taken off in the first half after a rash challenge from Valencia’s Francis Coquelin.