Liverpool fielded a starting lineup consisting mainly of reserves and youth team players with an average age of 19.4, a club record. 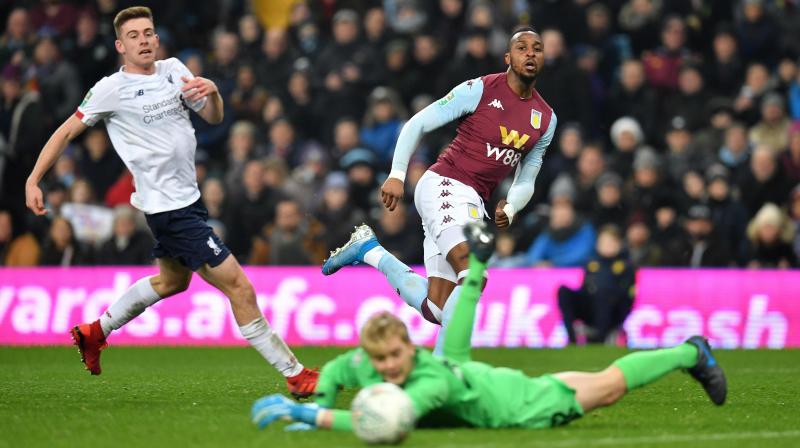 Aston Villa beat Liverpool’s youngest-ever side 5-0 with a double by Jonathan Kodjia helping them into the League Cup semi-finals on a strange night at Villa Park on Tuesday. (Photo:AFP)

Aston Villa beat Liverpool’s youngest-ever side 5-0 with a double by Jonathan Kodjia helping them into the League Cup semi-finals on a strange night at Villa Park on Tuesday.

While they acquitted themselves well against a more experienced Villa side, which showed 10 changes from the weekend Premier League defeat by Sheffield United, they were taught a harsh lesson in Liverpool’s heaviest League Cup defeat.

The Merseyside club’s senior players and manager Juergen Klopp, watching on TV in Qatar where they face Monterrey in the semis on Wednesday, would have been impressed over the way their team started with 16-year-old Harvey Elliott catching the eye.

But Villa took the lead in the 14th minute when Conor Hourihane’s free kick went through a crowded area and into the net with Kodjia initially claiming a touch.

Morgan Boyes, one of five Liverpool debutants to start, deflected Ahmed Elmohamady’s free kick over his own keeper Caoimhin Kelleher three minutes later before 30-year-old Kodjia ran through on his own to slot home the third goal in the 37th.

Villa’s Ivory Coast striker Kodjia made it 4-0 from close range just before halftime to end the tie as a contest, although Liverpool carved out several good chances after the break with some neat build-up play.

Villa added a fifth goal in stoppage time with record signing Wesley finishing clinically, having been sent clear by Trezeguet after coming off the bench.

Villa have reached the semi-finals for the first time since the 2012-13 season but the victory felt hollow.

Liverpool have won the League Cup a record eight times but sacrificed the chance of making it nine as they focused on the game in Doha against Mexican club Monterrey.

Questions will be asked about their decision to involve no senior players and the scheduling but despite the scoreline Liverpool had more shots and more possession than Villa.

Liverpool’s Under-23 manager Neil Critchley, in charge fo the team in Klopp’s absence, said his players, who had only 16 first-team appearances between them, had been magnificent.

“We were fantastic from the start, we had a couple of chances from the first whistle,” he said.

“We were really unfortunate to concede and find ourselves 2-0 down. It was an incredible night and no one wanted it to end. The support we had was unbelievable.

“Some of them showed the potential to one day play for us, or in the Premier League. They will know it was just part of their journey. My overwhelming feeling was of immense pride.”