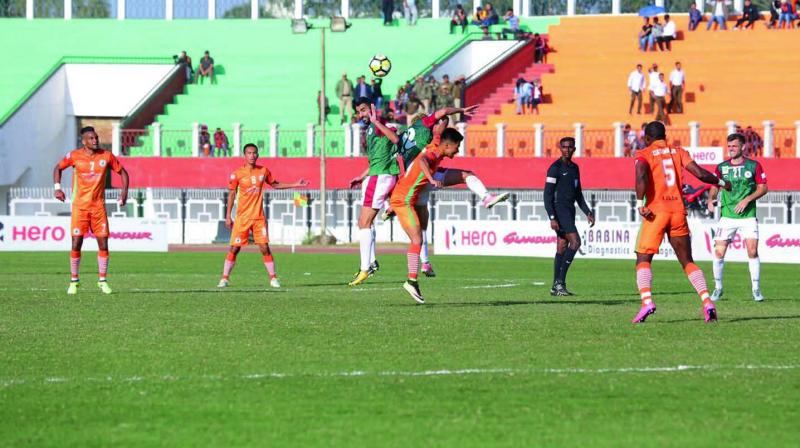 Action from the I-League match between Neroca FC and Mohun Bagan in Imphal on Sunday. Bagan won 3-2.

Dicka is now leading the goals tally with 11 strikes.

Subhash Singh (16th) and Felix Chidi (24th) scored for the home side at the Khuman Lampak Stadium.

Neroca remained on top with 31 points from 17 matches. Bagan improved to 24 points from 15 matches but stayed fourth.

The hosts took an early lead when Subhash capitalised on a mistake by experienced defender Kinshuk Debnath to chip it over an advancing Bagan goalkeeper Shilton Paul. But their celebrations were cut short when Dipanda earned a penalty, tumbling into the penalty box after an ill-timed tackle by Neroca goalkeeper Bishorjit Singh. Dicka made it 1-1 with a calm finish.Another defensive error by Debnath allowed Neroca to go ahead 2-1, Chidi robbing him off the ball and neatly slotting it past Paul.

Dicka struck again when the Neroca defence failed to read Arijit Bagui’s cross from the right. Bagan kept putting pressure on the league leaders and were rewarded on the stroke of half time.

Nikhil Kadam’s cross was flicked on across the face of goal by Yuta Kinowaki into the path of Moghrabi who nodded the ball in from close range to make it 3-2.

Lajong and Aizawl are fifth and sixth respectively with 18 points each.