Sports   Football  19 Mar 2017  Manchester United on the up as Fellaini strikes
Sports, Football

Manchester United on the up as Fellaini strikes

Manchester United were last beaten in the league at the end of October, a record which rarely looked under threat. 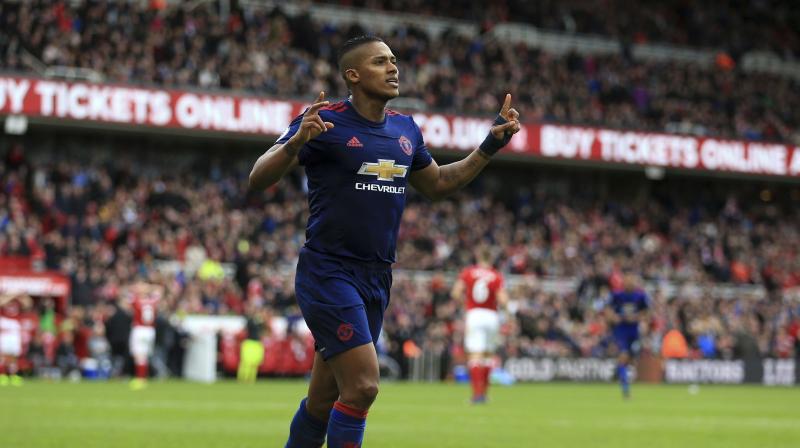 Manchester United's latest victory, as they became the first club to record 600 Premier League wins, puts them a distant 17 points behind leaders Chelsea but two points ahead of their nearest rivals Arsenal and Everton in seventh, boosting their hopes of a top-four finish in the race to qualify for a place in next season's Champions League. (Photo: AP)

Middlesbrough: Marouane Fellaini scored his first Premier League goal for 15 months as Manchester United extended their unbeaten Premier League run to 18 games to move up to fifth with a 3-1 victory at relegation-threatened Middlesbrough on Sunday.

Jesse Lingard added a stunning second and Antonio Valencia a stoppage-time third after an embarrassing mistake by former United keeper Victor Valdes as Jose Mourinho's side ended a 19-week stay in sixth by climbing a place.

Their latest victory, as they became the first club to record 600 Premier League wins, puts them a distant 17 points behind leaders Chelsea but two points ahead of their nearest rivals Arsenal and Everton in seventh, boosting their hopes of a top-four finish in the race to qualify for a place in next season's Champions League.

Middlesbrough pulled a late goal back through substitute Rudy Gestede, but they remain second-bottom, five points adrift of safety after an 11th league game without victory as caretaker manager Steve Agnew tasted defeat in his first match following the departure of Aitor Karanka.

Gestede initially appeared to bite defender Eric Bailly in a stoppage time melee on the edge of the visitors' area in an altercation missed by referee Jon Moss and his assistants.

Replays showed there was no contact as the pair engaged in an angry clinch, but punches appeared to be thrown afterwards in the players tunnel a both sides left the pitch.

United were last beaten in the league at the end of October, a record which rarely looked under threat once they took a deserved 30th minute lead through Fellaini.

The Belgian international midfielder had scored his previous league goal in a 2-1 defeat at Bournemouth in December 2015, but had few problems in ending that barren run with his third goal of the season.

Ashley Young cut in from the left to send over a searching cross to the far post, and as Valdes and former Manchester United defender Fabio hesitated, Fellaini was left with the simple task of heading the ball into an unguarded net from close range.

Valdes had kept his side in the contest with a stunning double save to keep out a point-blank Marcus Rashford effort from Juan Mata's cross, before recovering to block the follow-up from Valencia.

The former Barcelona keeper had already denied Rashford with a fine block after the forward out-paced his marker Bernardo to Valencia's astute through-ball.

David De Gea was called into action just once before the break, saving well from Gaston Ramirez, who along with Stewart Downing and Alvaro Negredo was restored to the starting line-up by Agnew, the trio having previously fallen out of favour with Karanka.

The injured Wayne Rooney was again unavailable for the visitors as Mourinho made seven changes from the midweek Europa League victory over Rostov.

With Zlatan Ibrahimovic suspended and Paul Pogba ruled out by a hamstring problem, it was only the third time this season neither had featured on the team-sheet.

United made light of their absence as Lingard doubled the lead in spectacular style in the 62nd minute.

The England international picked up possession just inside the Middlesbrough half, and as Bernardo stood off inviting the midfielder to advance, he did just that to send an unstoppable shot into the top corner from 20 yards.

Negredo went close with two second-half headers, before Gestede made the most of an error from Chris Smalling to reduce the arrears from close range with his first league goal since a move from Aston Villa in January to end his side's eight-and-a-half hour wait for a league goal.

It gave the hosts hope of salvaging a point in the final 13 minutes, but Mourinho's side held out without further alarm, Valencia pouncing on a slip by Valdes to walk the ball into an unguarded net to embellish the margin of victory.