Olympiakos halved the deficit through Daniel Podence shortly before halftime. 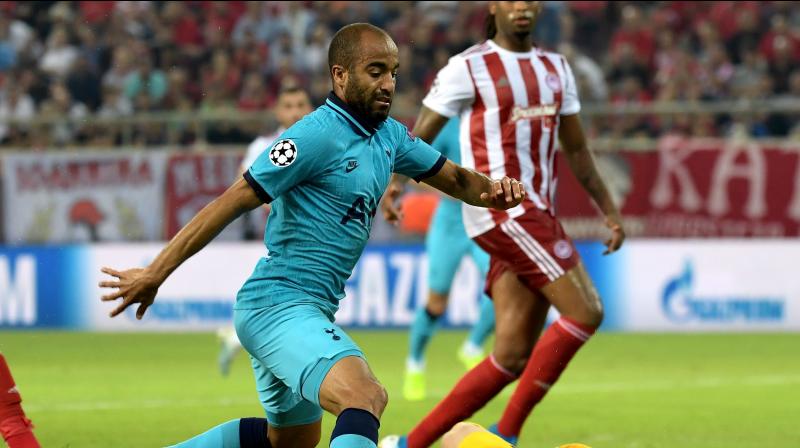 Tottenham silenced the raucous crowd with two goals in four minutes midway through the opening half, first with Harry Kane’s well-struck penalty and then a stunner by Lucas Moura. (Photo:AFP)

Tottenham silenced the raucous crowd with two goals in four minutes midway through the opening half, first with Harry Kane’s well-struck penalty and then a stunner by Lucas Moura.

Olympiakos, who had conceded only once in nine games in all competitions so far this season, halved the deficit through Daniel Podence shortly before halftime.

The hosts levelled it up after 54 minutes when Mathieu Valbuena beat fellow Frenchman Hugo Lloris from the penalty spot after some sloppy play by the visitors.

While it was an improvement on their start in last season’s ultimately memorable Champions League campaign, when they lost their opening two matches, Tottenham will be disappointed at their failure to protect their lead.

They will need to be far more clinical when they host Bayern Munich in their second game. Olympiakos will travel to Red Star Belgrade next.

“When you go 2-0 up after 30 minutes you are in a great position, after that I thought we controlled the game whereas before we didn’t play well but scored two goals,” Kane said.

“The goal just before halftime changed the momentum and it’s disappointing from our point of view. We have to improve.

“We wanted to get off to a winning start and put ourselves in a great position.”

Tottenham welcomed back big-money signing Tanguy Ndombele after injury, handed Alli his first start of the season and gave Lucas Moura, hero of last season’s semi-final win over Ajax Amsterdam, the nod ahead of Son Heung-min.

But they were slow to get going and were given an early wake-up call when Miguel Angel Guerrero’s first-time volley rebounded back off the post after a chested lay-off by Podence.

Tottenham took the lead against the run of play in the 26th minute when Kane was needlessly tripped by defender Yassine Meriah and handed out punishment with an unstoppable penalty.

Moura then showed an exquisite first touch from Ben Davies’s pass to thump a shot past keeper Jose Sa.

It was harsh on Olympiakos but they responded well with Valbuena’s pass slicing open Tottenham’s defence and Podence’s low shot going in off the post.

Tottenham invited trouble early in the second half when Christian Eriksen was caught in possession on the edge of his area and Valbuena was fouled by Jan Vertonghen.

Referee Gianluca Rocchi pointed to the spot and after a lengthy delay for a VAR check, Valbuena converted the penalty.

Alli had a shot well-saved by Sa and Lamela tried his luck from a tight angle as Tottenham raised the tempo but Olympiakos stretched their unbeaten run at home in Europe to 10 games.