The Portugal star leapt above a defender and hung in the air to meet a cross before planting a header into the top of the net. 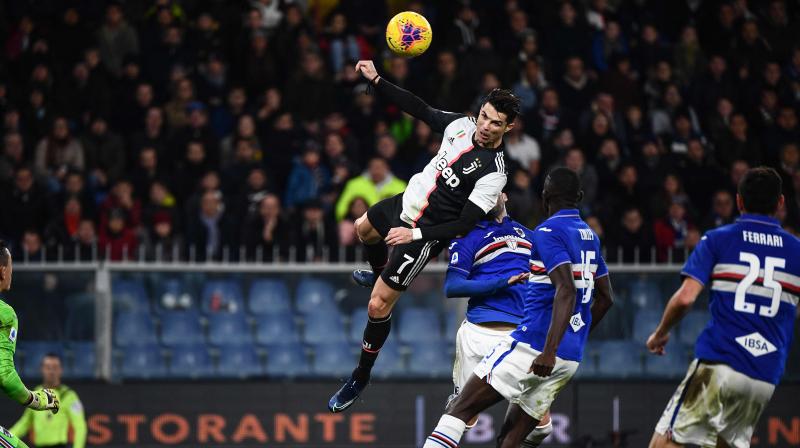 Cristiano Ronaldo's scoring streak continued as the Juventus forward netted a soaring header to secure a 2-1 victory at Sampdoria, putting the defending champion back atop the Serie A standings. (Photo: AFP)

Milan: Cristiano Ronaldo's scoring streak continued as the Juventus forward netted a soaring header to secure a 2-1 victory at Sampdoria, putting the defending champion back atop the Serie A standings.

Juventus goalkeeper Gianluigi Buffon matched Paolo Maldini's all-time record of 647 Serie A appearances in the game on Wednesday, but Ronaldo found a way to steal the spotlight once again.

The Portugal star leapt above a defender and hung in the air to meet a cross before planting a header into the top of the net for the winning goal on the stroke of halftime.

"The goal was nice, but I am especially happy to have helped the team to get the three points," Ronaldo said.

"The important thing is to help Juventus win titles. Sampdoria coach Claudio Ranieri said all he could do was applaud.

"When someone scores a goal like that you have to just watch and admire," he said.

"Ronaldo scored in the style of an NBA player, he was in the air for an hour and a half."

The 34-year-old Ronaldo didn't score a goal in November but now has six in his past five matches.

"I had a problem with my knee which affected me for a month but now I feel very good," he said.

Juventus moved three points above Inter Milan, which has played a game less than the eight-time defending champion.

And Dybala gave Juve the lead in the 19th minute when he hit Alex Sandro's cross on the volley and it bounced onto the ground and into the far bottom corner.

Alex Sandro was then at fault for the equalizer in the 35th when he twice gave the ball away leading to Caprari's goal.

But the Brazil defender again turned provider with another cross from the left to set up Ronaldo's spectacular header.

Ronaldo thought he had doubled his tally late on but the goal was ruled out for offside.

Caprari was sent off in stoppage time for an elbow on Juventus defender Merih Demiral.

Sassuolo moved six points off the relegation zone with a 2-0 win at fellow struggler Brescia.

The match had been rescheduled from Oct. 6 after the death of Sassuolo President Giorgio Squinzi.

Mario Balotelli though he had leveled shortly before halftime but it was ruled out for offside and Francesco Caputo sealed the result in the 71st.

Brescia remained in the relegation zone, two points below Sampdoria and the last safety spot. However, it has played a match less than Samp.