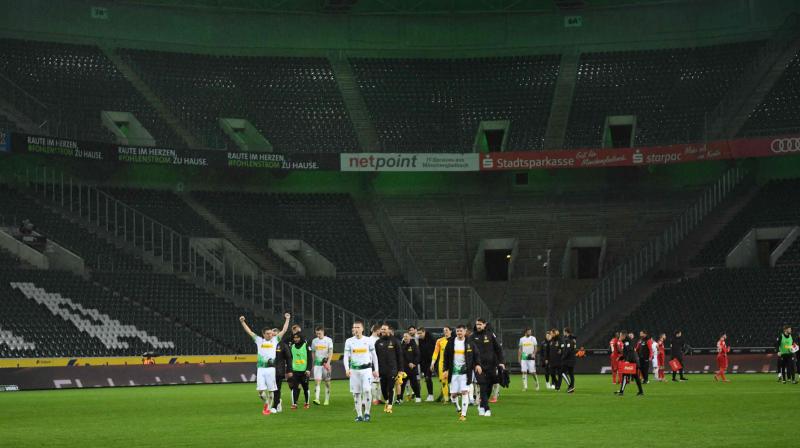 Moenchengladbach's players celebrate after the German first division Bundesliga match against Cologne on March 11. It was the first game in Bundesliga history to be played without fans. AFP Photo

Berlin: A German virologist says he doesn't think professional soccer in the country will be able to resume this year.

Jonas Schmidt-Chanasit, of the Bernhard Nocht Institute for Tropical Medicine in Hamburg, tells broadcaster NDR: "I firmly believe it will only be possible for it to take place again next year.''

The German soccer league has already suspended play in the county's top two divisions through April 2, though most expect play to resume without spectators in May at the earliest.

Schmidt-Chanasit says the so-called "ghost games'' without fans are also unlikely to take place as fans would gather elsewhere to watch them if they are not allowed in the stadiums.

"I believe it's not realistic that the season will be able to be played to the end,'' he tells NDR. "We can see what the situation is like in Europe and what's ahead of us.''

Schmidt-Chanasit says that even if Germany isn't hit as badly as Italy by the new coronavirus, it shouldn't mean that soccer restarts as "that means the situation would worsen again significantly.''