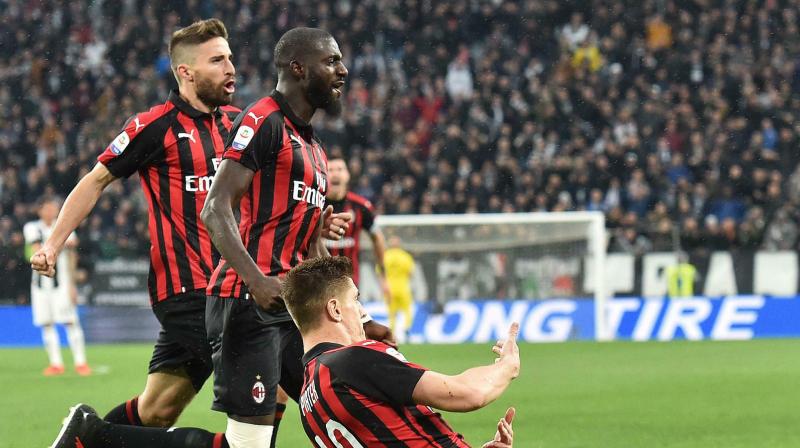 Gennaro Gattuso’s side are level with Atalanta on 65 points but occupy fourth place due to a superior head-to-head record, while they are one point behind rivals Inter Milan in third. (Photo: AP)

AC Milan provisionally moved into the Champions League places in Serie A with a 2-0 win at home to relegated Frosinone on Sunday.

Goals from Krzysztof Piatek and Suso secured the three points after Milan goalkeeper Gianluigi Donnarumma saved a Camillo Ciano penalty early in the second half.

Gennaro Gattuso’s side are level with Atalanta on 65 points but occupy fourth place due to a superior head-to-head record, while they are one point behind rivals Inter Milan in third.

However, Atalanta and Inter have yet to play this weekend and could restore a cushion over Milan when they face Juventus and Napoli respectively later on Sunday.

The result also means Milan are mathematically assured of at least Europa League football next season as they are five points clear of seventh-placed Torino. Milan visit mid-table SPAL in their final league match of the season next Sunday.

“It was a difficult game. We knew it would be and that Frosinone would come here with the right attitude,” Gattuso told Sky Italia. “We had a scare, we thank Donnarumma for getting us out of trouble and can look to the next game.

“In my view, there has been a lot of chatter and I’ve been considered on the way out since pre-season. The table talks. Look over the last six years at how many points Milan earned and look where we are now. I think we did what we had to do.”

The home side were booed off by the San Siro crowd after a poor first half performance against second-bottom Frosinone and things promised to get worse when Ignazio Abate bundled over Luca Paganini to concede a penalty four minutes after the break.

However, Donnarumma sprang to his left to keep out Ciano’s 50th minute spot kick before Piatek prodded in the opener from close range seven minutes later.