The Welsh finished runners-up on 14 points from eight games, three behind Croatia. 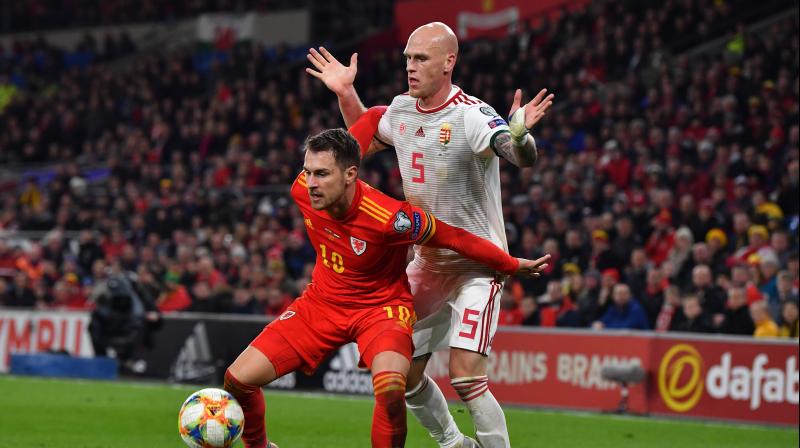 Wales reached their second straight European Championship finals after a goal in each half by midfielder Aaron Ramsey gave them a 2-0 home win over Hungary in their decisive Group E qualifier on Tuesday. (Photo:AFP)

Cardiff: Wales reached their second straight European Championship finals after a goal in each half by midfielder Aaron Ramsey gave them a 2-0 home win over Hungary in their decisive Group E qualifier on Tuesday.

The Welsh, who reached the Euro 2016 semi-finals, finished runners-up on 14 points from eight games, three behind Croatia who sealed their berth on Saturday with a 3-1 win over Slovakia.

Having previously gone 58 years without reaching a major tournament after the 1958 World Cup, there were joyous scenes at the Cardiff City Stadium as Wales produced a dominant display to wrap up qualification.

The outcome was a triumph for manager Ryan Giggs, who never kicked a ball at a World Cup or European Championship as a player but can now revel in guiding his country to Euro 2020 after taking over from Chris Coleman in January 2018.

“It doesn’t get any better, it’s amazing,” Giggs was quoted as saying by the BBC.

“From where we were in the summer, all credit to the lads for coming back. One of the best days of my life.”

Both sides needed victory to progress and Wales drew first blood when Ramsey rose to head home from six metres in the 15th minute after a perfect Gareth Bale cross from the right.

With Hungary pressing for an equaliser, goalkeeper Wayne Hennessey made a crucial double save in the 34th minute when he parried a Dominik Szoboszlai shot from eight metres and then smothered Roland Sallai’s follow up.

Ramsey, who tore Hungary’s midfield apart with crisp passing, struck again in the 47th with a close-range drive into the top corner after Kieffer Moore scrambled a Ben Davies free kick into his path.

Hungary were fortunate not to concede more goals as Daniel James curled a shot from the edge of the penalty area inches wide before Hungary keeper Peter Gulacsi denied Ramsey a hat-trick with a reflex save.

Ramsey, who had struggled at club and international level since his close-season move from Arsenal to Juventus, hoped for a campaign similar to the one in 2016 when the Welsh emerged as the tournament’s surprise package.

“We had the best time of our lives in France (at Euro 2016) so we wanted to make sure we got there again,” he said.

“I missed a lot of this campaign but I’ve chipped in now and it’s worthwhile.”

Bale added: “It’s about time he contributed! He’s a world class player, it’s great to have him back and his goals helped us through.

The Hungarians will have another chance to reach next year’s 24-nation tournament via the playoffs and so will Slovakia, who beat Azerbaijan 2-0 at home in the group’s other fixture.

The Slovakians needed Wales and Hungary to draw in order to progress with a win against the Azeris but goals from Robert Bozenik and Marek Hamsik turned out to be a mere consolation in light of a magnificent Welsh performance.