A couple of missed chances would probably have been converted by the Haitian on another day. 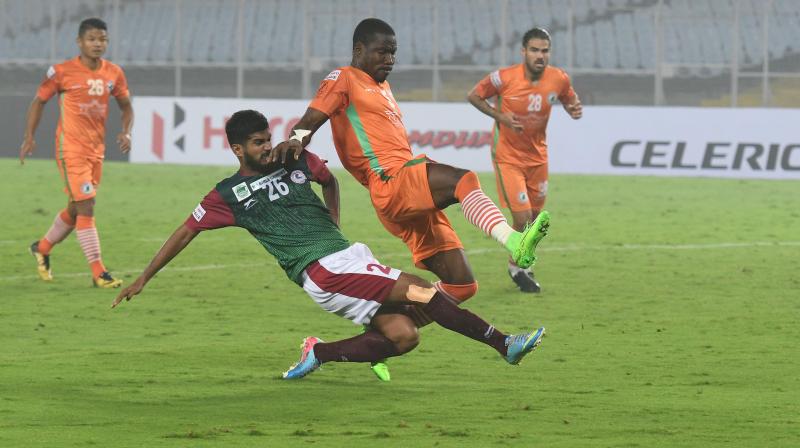 Mohun Bagan’s Shilton D’Silva (second from left) in action against Neroca FC in their I-League match at Salt Lake Stadium in Kolkata on Tuesday.

New Delhi: Off-colour Mohun Bagan were held to a goalless draw with Neroca FC in I-League action at Kolkata’s Salt Lake Stadium on Tuesday despite the return of prolific goial-scorer Sony Norde.

After Bagan were held 1-1 by Shillong Lajong, Norde and Ansumana Kromah — who missed that game with injury — were expected to lend an edge to the attack.

That however, was not to happen.

After a first minute shot saved by a diving Lalit Thapa, Norde appeared to struggle as Aser Dipanda took all of the subsequent set-pieces. A couple of missed chances would probably have been converted by the Haitian on another day.

Neroca dictated proceeding from the centre of the park. Subash Singh and Gopi Singh swapped flanks regularly to flummox the Mohun Bagan fullbacks. However, Felix Chidi and Israilov could not convert from easy chances they got in the first half.

Kromah put the ball into the net to bring the crowd alive from Shilton D’Silva’s through ball, but he was ruled offside.

That story continued in the second half when five minutes after resumption, Norde’s goal was disallowed as he was trapped offside after Kromah released him from a dangerous sprint down the middle.

While Mohun Bagan’s attack appeared toothless, it was the midfield of Raynier Fernandes and D’Silva that held on. Man of the match Rana Gharami was impressive in the way he handled the backline in the absence of Kingsley.

The Manipur outfit looked content with the draw but Sanjoy Sen will be sweating on Norde’s injury after he was stretchered off the field, further aggravating a knock on the left knee.

Bagan remain third with noine points from five matches while Neroca, up against Shillong Lajong next are fifth.

In the day’s other match, hosts Churchill Brothers plunged to their fifth straight defeat, going down 0-2 to Chennai City FC. Jean-Michel Joachim (45+1) and Murilo Almeida (52) scored for the winning side.