India’s national football team came to the city to ahead of an international friendly against Nepal. 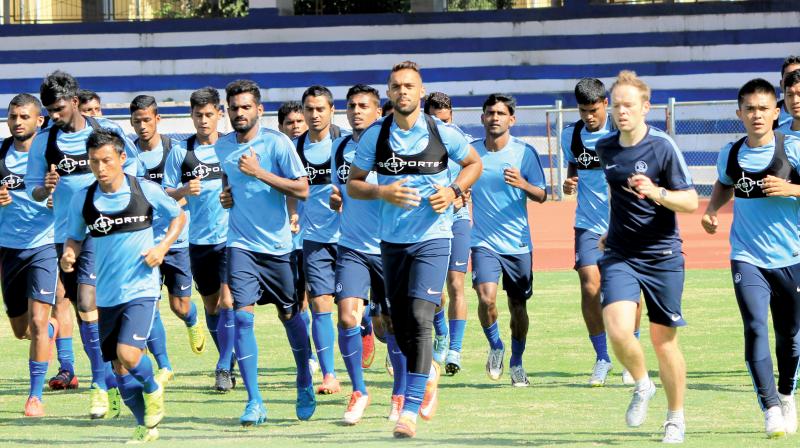 Indian Team will camp in Mumbai ahead of Kyrgyz Republic match.

When India’s national football team came to Mumbai to play their international friendly against Puerto Rico, it brought joy to local football fans as the city was hosting the national team after a gap of 61 years. However, things have changed significantly after that visit and the Mumbai Football Arena, Andheri Sports Complex (ASC) has now become the national team’s most preferred football ground in the country.

Ahead of India’s international friendly against Nepal, the 35-strong India probables squad reached Mumbai, on Saturday. This is the national’s team’s fourth visit to the city in the last 10 months.

They visited the Mumbai facility in September last year before the Puerto Rico friendly, in March, before friendly match against Cambodia as preparations for Asian cup qualifier and also before the match against Myanmar.

Despite the fact that football-crazy stats of West Bengal and Goa will draw large crowd to watch a football match, national team coach Stephen Constantine says that he prefers ASC in Mumbai because of its natural turf.

“We had a lovely experience in Mumbai when we camped and played Puerto Rico. The memories of which the national team carries with them. It was such a positive feeling. Mumbai is a sporting city,” the Indian national coach said.

The Indian national team is camping yet again at the ASC to prepare for India’s forthcoming AFC Asian Cup UAE 2019 qualifying match against the Kyrgyz Republic, which is slated to be played in Bengaluru on June 13.

Constantine shares a good equation with Mumbai District Football Association chairman Aaditya Thackeray and has openly expressed his liking for ASC playing field as the Englishman prefers natural turf. Plus the hot humid conditions help the team to get ready for tough conditions, he said. The ground has come in for spraise from many current Indian footballers like Gurpreet Singh Sandhu and Subrata Paul.

In March, ASC also hosted Indian national camp ahead of their friendly against Cambodia which served as perfect preparation for the AFC Asian Cup UAE 2019 qualifying match against Myanmar in Yangon. India won both the away games and achieved its best ever ranking in 21 years with its current ranking of 100.