Navas has been exceptional at Madrid as he helped the 33-time La Liga winners to clinch three Champions League trophies in a row. 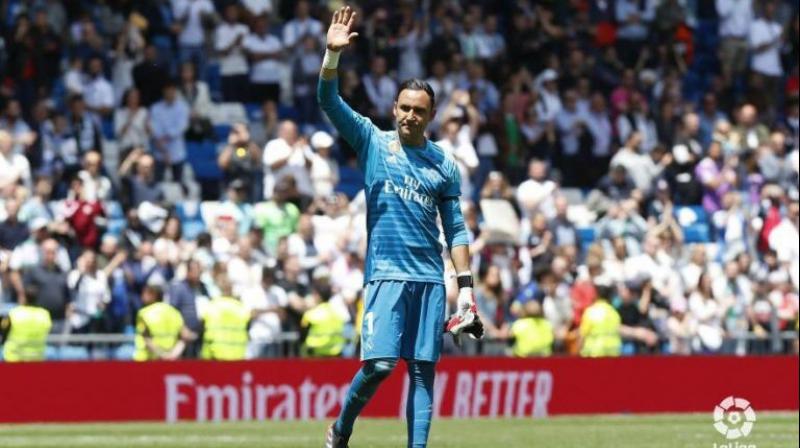 Mumbai: Real Madrid favourite goalie, Keylor Navas bid adieu to the Los Blancos crowd prior to the club’s last game of the season.

The Madrid fans chanted Navas’ name at the club’s home ground, Santiago Bernabeu, and gave him a standing ovation after he played his last game for the 13-time Champions League winners.

The Brazilian goalkeeper knelt down and pointed to the sky, as a sign of thank you to the Al-mighty.

Navas has been exceptional at Madrid as he helped the 33-time La Liga winners to clinch three Champions League trophies in a row.

The beloved keeper of Madrid featured in 20 matches this season, saved seven goals, and conceded 19.

Although, Navas has kept mum on his future, but after five years he made it clear that he wants to leave.

The 32-year-old Costa Rican may depart from Madrid as he had been replaced by Beligum’s 27-year-old, Thibaut Courtouis in 2018. Zinedine Zidane, the head coach of Madrid made Navas number two, leaving him in competition with his 21-year-old son, Luca Zidane, stated the Efe news reports.

However, the club officially didn’t announce Keylor’s departure.  Reportedly, Navas has been told to leave Real Madrid after this season.

Meanwhile, Marca.com reported, Zinedine Zidane is keen to include Thibaut Courtois in his starting XI for the 2019-20 season.

In an emotional moment after the final whistle blew, the fans applauded Keylor who immediately returned the ovation.

After the match referee blew the final whistle, the fans appreciated Keylor, who instantly thanked the fans for their support.

After Navas received his standing ovation, Keylor’s family also entered the field to receive a farewell photograph in his final match at the Bernabeu.

Nonetheless, Real Madrid ended its season with a shameful 2-0 loss at the hands of Real Betis.