Pep Guardiola's City side became the first to complete a clean sweep of all three major English trophies. 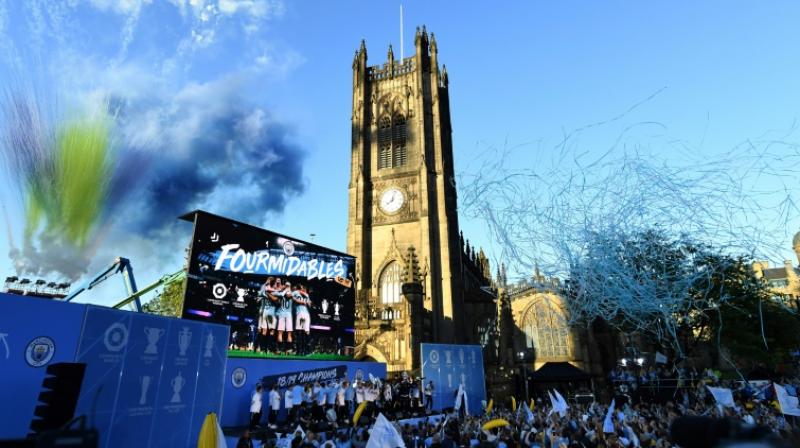 Manchester: Manchester City celebrated their domestic treble with an open-top bus parade on Monday, drawing an estimated 100,000 fans to the streets of the city centre.

Pep Guardiola's City side became the first to complete a clean sweep of all three major English trophies with Saturday's 6-0 thrashing of Watford in the FA Cup final at Wembley.

They clinched a second successive Premier League title the previous week and also won the Carabao Cup in February. It was the fourth time in seven years the club had taken over the city centre for an afternoon with a celebratory parade. Adding the Community Shield to the tally, the club had banners branding themselves as "The Fourmidables".

The victorious squad were joined by members of the City women's team, who also won an FA Cup and League Cup double this year. Guardiola insisted he has not thought about next season but admitted captain Vincent Kompany will be missed at the club after the defender confirmed his departure to become player-manager at Anderlecht.

"Zero," the Spaniard said when taking to the stage.

"Now is time for good dinners and good wine. We will think about it in one month's time, and enjoy it now.

"I think we will miss Vincent a lot. He is coming back in the future in some way. It is an incredible way to finish the season. He will come out soon and you will see how much we love him."

Kompany said he realised the time was right to leave when he scored a stunning winner against Leicester in City's penultimate Premier League match. The victory took City within one more win of the title.

"The moment that ball against Leicester went 'top bins' I knew I was done! I couldn't do anything better. It felt right," Kompany said. The Belgian now expects the club to go on to even greater success in the future.

"This team is ready to achieve so much more," he said.

Organisers said the the crowd for the parade, which culminated with the stage show outside Manchester Cathedral, was estimated to be around 100,000. Kompany finished his speech by declaring City were the "best club in the world" regardless of European success.