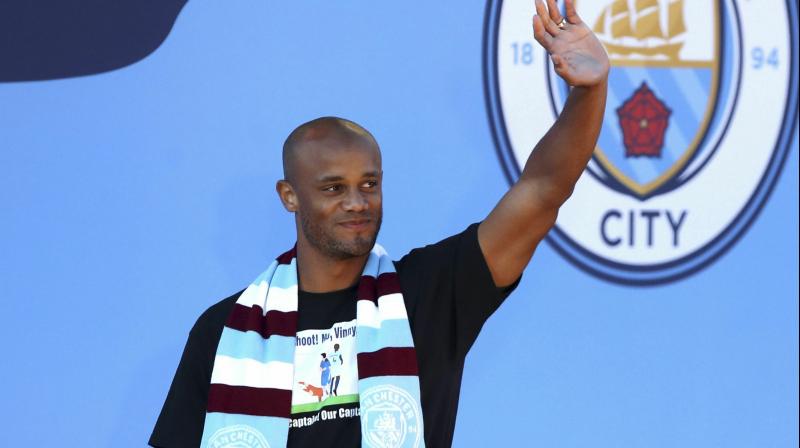 Kompany had announced on Sunday, May 19, that he is going to leave the club for a player-manager role at Belgian football club R.S.C. Anderlecht. (Photo: AP)

Leeds: English football club Manchester City's manager Pep Guardiola on Tuesday said that he is convinced that Vincent Kompany will return to the team sooner or later.

Kompany had announced on Sunday, May 19, that he is going to leave the club for a player-manager role at Belgian football club R.S.C. Anderlecht.

The 33-year-old defender had spent 11 years at Manchester City and enjoyed huge success with the club. He was able to win all the major trophies with the club, barring the Champions League title.

His final success came on Saturday, May 18, when City defeated Watford 6-0 to win the FA Cup, adding another trophy to their cabinet. This year the club was able to win the Premier League title and EFL Cup as well.

Guardiola said it was the best way to bid him goodbye after winning all the major trophies this year.

"It's the best way to say goodbye after an incredible season together. He was a real captain, he helped us a lot," Guardiola said.

"Now it's time to have good food, good wine and enjoy this incredible season together. In a few weeks, we are going to think about the future. Now we are going to enjoy what we have done," he added.

City ended the Premier League season with 98 points whereas Liverpool finished with 97.