Antonio Conte's arrival at Inter Milan has also raised expectations of an end to Juventus's long domination in the season. 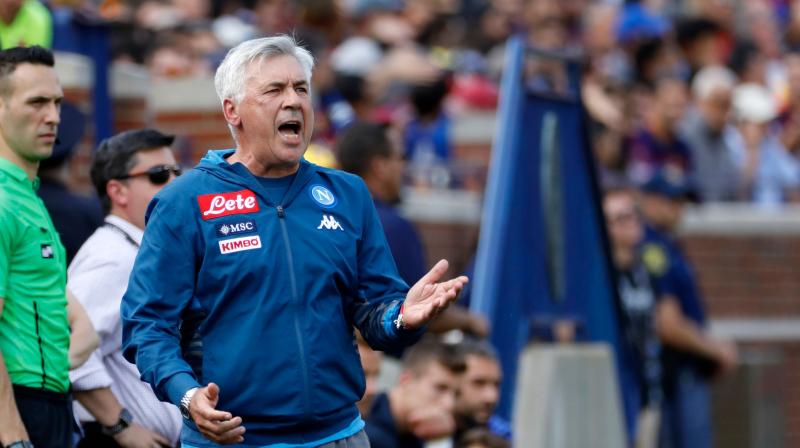 Carlo Ancelotti's campaign begins in Fiorentina on Saturday, after Juventus, now coached by Maurizio Sarri, open their quest for a ninth consecutive title in Parma. (Photo:AFP)

Milan: As the sole survivor of a coaching shuffle among the leading challengers, Carlo Ancelotti could have the best chance to end Napoli's 30-year wait for the Serie A title.

Yet Antonio Conte's arrival at Inter Milan has also raised expectations of an end to Juventus's long domination in the season that kicks off on Saturday.

Serie A runners-up Napoli have not held the Scudetto aloft since Argentine legend Diego Maradona inspired them to their only titles in 1987 and 1990.

Ancelotti's campaign begins in Fiorentina on Saturday, after Juventus, now coached by Maurizio Sarri, open their quest for a ninth consecutive title in Parma.

Chinese-owned Inter Milan have also changed coaches with former Juventus and Chelsea boss Conte back home in Italy. Marco Giampaolo takes over at AC Milan and Paulo Fonseca at Roma.

Sarri came close two years ago when he guided Napoli to runners-up spot, just four points behind Juventus, before moving to Chelsea.

At 60, Sarri returns to Italy to coach Juventus as the champions look for a new direction despite five trophy-laden seasons under Massimiliano Allegri.

The decision by Napoli-native Sarri to move north has hurt in his home town.

"For us Neapolitans, that was a betrayal," said captain Lorenzo Insigne.

"Now we have to try to beat him at all costs." Ancelotti embarks on the second year of his three-year contract, and wants silverware this campaign.

The 60-year-old has won titles in Europe's five biggest leagues. His Serie A title came with AC Milan back in 2004.

He arrived in Naples boasting three Champions League trophies from his spells with Milan and Real Madrid, and a Premier League title from his two-year tenure at Chelsea.

The veteran coach insists he has learned from his "transitional" first season.

"We drew back the arrow, now we are ready to fire," he warned. Ancelotti has bolstered in all areas with the arrival of defender Kostas Manolas, midfielder Elif Elmas and winger Hirving Lozano.

Inter are being remodelled by former Italy boss Conte, who won three Serie A titles in a row with Juventus from 2012 to 2014, and the Premier League with Chelsea in 2017.

Inter last won the title in 2010 under Jose Mourinho, and open at home against newly-promoted Lecce on Saturday.

But even amid uncertainty over how Sarri, who could miss the Parma opener with pneumonia, will adapt to life at Juventus, the Cristiano Ronaldo-powered champions remain favourites.

The midfield has been strengthened with PSG's Adrien Rabiot and former Arsenal star Aaron Ramsey.

Giampaolo takes over at AC Milan who missed out on Champions League qualification.

The only non-Italian involved in this game of musical coaching benches, is Fonseca, working for the first time in Italy at Roma, who finished sixth last season. Gian Piero Gasperini remains at Atalanta after leading the unheralded northeners to a Champions League berth with a third-place finish just ahead of Inter on goal difference. The side from Bergamo open against SPAL.