Sergi Enrich reduced the arrears when he capitalised on some sloppy Barca defending to slot home David Junca’s cross. 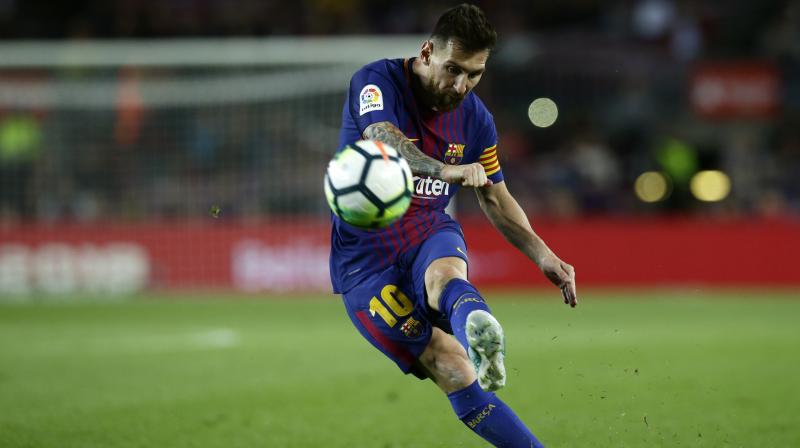 Madrid: Lionel Messi added four more goals to his soaring early season tally as a much-changed Barcelona maintained their 100 per cent start to La Liga by routing Eibar 6-1 on Tuesday.

Paulinho and Denis Suarez also netted for the second consecutive game as Barca stretched their lead at the top of La Liga to seven points over Real Madrid, who host Real Betis on Wednesday.

“He has done it so many nights, in so many games. To keep repeating it is the most difficult thing. He is an extraordinary player. I have run out of words for him.”

Messi played in a more central role as Valverde heavily rotated his side for the first time since taking charge with Luis Suarez dropping to the bench among six changes from Saturday’s hard-fought 2-1 win at Getafe.

And contrary to their fortunes last season, Barca’s back-ups proved Valverde can take the luxury of resting some of his star names with Paulinho particularly impressive on his first start.

Messi opened the scoring in nonchalant fashion from the penalty spot on 21 minutes after Nelson Semedo had been felled by an ungainly challenge from Alejandro Galvez.

Paulinho’s 40-million-euro ($48 million) signing from Chinese side Guangzhou Evergrande was one of a series of moves that drew stinging criticism for Barca’s board following Neymar’s world-record departure for Paris Saint-Germain.

However, after coming off the bench to score the winner at Getafe, Paulinho powered home his second Barca goal from Denis Suarez’s corner seven minutes before half-time.

Paulinho also played his part in Barca’s third with a cute dummy that freed Messi and, when his shot was parried by Marko Dmitrovic, Denis Suarez fired home the rebound.

Sergi Enrich reduced the arrears when he capitalised on some sloppy Barca defending to slot home David Junca’s cross.

However, Messi quickly restored Barca’s three-goal lead with a lovely measured finish from the edge of the box.

The five-time world player of the year completed his hat-trick just after the hour mark by prodding through Dmitrovic’s legs from Paulinho’s pass.

And he added his 12th goal in just eight games this season three minutes from time after a neat one-two with Aleix Vidal.

Barca lead second-placed Sevilla, who host Las Palmas on Wednesday, by five points with Valencia now just a point further adrift as they moved up to third thanks to Simone Zaza’s seven-minute hat-trick in a 5-0 thrashing of Malaga.

By contrast, a fifth straight defeat to start the season sees Malaga slip to bottom of the table and plunges coach Michel into further danger of becoming the second La Liga boss to be sacked this term.