Romelu Lukaku was just about to take a penalty when the incident occurred with the Inter Milan striker going on to convert a penalty. 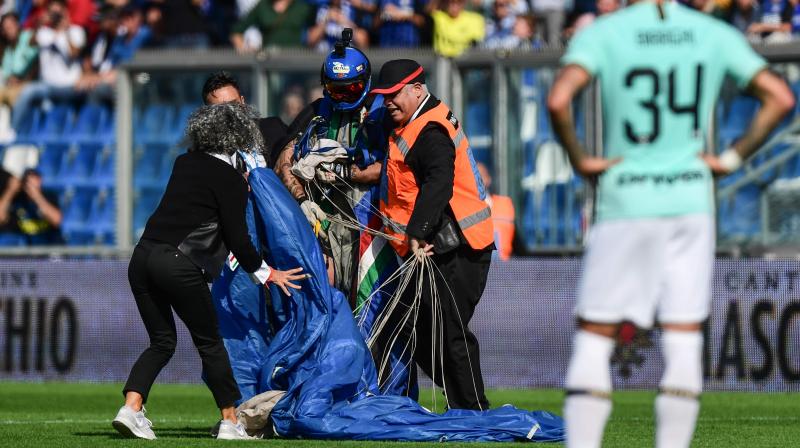 The parachutist was quickly evacuated by security agents at the stadium in Emilia-Romagna. (Photo :AFP)

Milan: A parachutist landed on the pitch during Sunday's seven-goal Serie A thriller between Sassuolo and Inter Milan in northern Italy. The game was briefly suspended at Sassuolo's Mapei Stadium two minutes before the break.

Romelu Lukaku was just about to take a penalty when the incident occurred with the Inter Milan striker going on to convert for a 3-1 lead for the visitors.

Broadcaster DAZN did not show images during the live broadcast of the match but the photos soon went viral on social media in Italy.

The parachutist was quickly evacuated by security agents at the stadium in Emilia-Romagna.

Braces from both former Manchester United striker Lukaku and Lautaro Martinez sealed a 4-3 win for Inter, who stay second in the Italian league one point behind leaders Juventus who beat Bologna 2-1 on Saturday.

Martinez had opened after two minutes, adding a penalty after 71 minutes with Lukaku scoring a quick-fire double on 38 and 45 minutes.

Inter were leading comfortably 4-1 with 20 minutes to go, and with the game firmly under control, Antonio Conte gave winger Matteo Politano and midfielder Valentino Lazaro their first starts this season.

But Filip Djuricic (74) and Jeremie Boga (81) hit back for the hosts late to add to Domenic Berardi's first-half goal.

Inter held on for a win after two consecutive defeats against Barcelona in the Champions League and Juventus in Serie A.

"The positive we take is that we got the three points, but we need to defend better than that.

"It was very important to get this win."

Sassuolo fell to their fifth loss of the season to sit 16th just above the relegation zone.

"For more than an hour we played very well, then there was a blackout that we will analyse in detail," said Inter assistant coach Cristian Stellini speaking as Conte missed the post-match conference because of illness.