The result sees Chennaiyin leapfrog Blasters into the eighth position while the visitors stretched their winless run to eight matches. 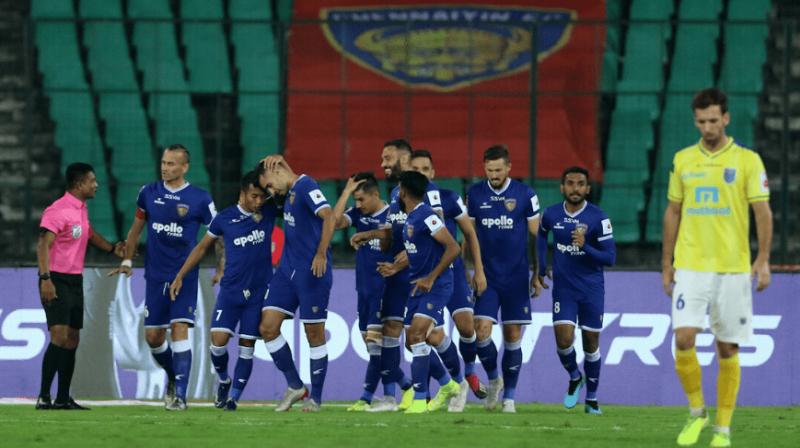 Bartholomew Ogbeche with a strike in the 15th minute had equalised for the Kerala team.

The result sees Chennaiyin leapfrog Blasters into the eighth position while the visitors stretched their winless run to eight matches.

However, the excitement of the first half was not seen in the second as no goals were scored.

To Chennaiyin FC's credit, the defence held firm amid some threat from the Blasters forwardline and kept the two-goal lead intact.

A goal in the fourth minute by Schembri sent the home fans into raptures as CFC seemed to have found the goal-scoring touch a long barren period at the start of the season. The early goal injected a bit of confidence into the home side's game, but they could not hold on to the lead for long.

Blasters equalised in the 14th minute through Ogbeche. An intelligent free-kick routine saw Mario Arques lay the ball off for Ogbeche, who finished with an excellent shot that flew past a hapless Vishal Kaith. The game took a turn in the 25th minute when Chennaiyin caught the Kerala defence off-guard with a quick freekick.

Schembri was sent clear on goal and the Maltese striker squared it for Nerijus Valskis to turn it in.

However, the goal sparked huge protests from the Kerala players and officials, with the referee eventually disallowing it after consultation with the linesmen. CFC regained the lead immediately after the match re-started. Rafael found some space in the middle and chipped a pass for Valskis. The Lithuanian laid it off first-time for Chhangte who took it in his stride and slipped it in past TP Rehenesh in the Blasters goal.

The third goal came when Chhangte got on the end of a long ball from Anirudh Thapa and attempted a lob from distance after seeing Rehenesh rush off his line. However, the ball bounced back off the post and fell for Valskis who shot home.

Kerala were dealt another blow at half-time when Ogbeche had to be taken off injured, with Moustapha Gning replacing him.

The visitors continued to see more of the ball in their search for a way into the match. Kerala also sent in Sahal Abdul Samad as they mounted the pressure on the Chennaiyin goal but the home side's defence held firm.