And his recent sub-par performances have forced Tite to think of alternatives. 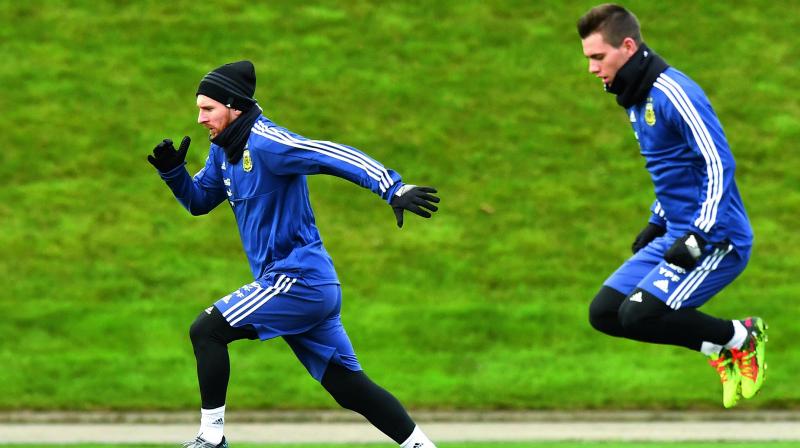 Argentina’s Lionel Messi (left) at a training session in Manchester on Wednesday, ahead of their friendly against Italy on Friday. (Phpto: AFP)

Sao Paolo: Going into his first World Cup as Brazil coach, Tite is looking for some rhythm. It’s the one thing, surprisingly, he thinks his team is short of.

So Tite will use the upcoming friendlies against World Cup hosts Russia and defending champions Germany to find a proper no. 10, someone who can play at the heart of the midfield and keep his orchestra in sync.

“To use a samba concept, I need a rhythm-maker,” Tite said recently.“Even if that player is not in his top form he will be brought in because the team needs that.”

Beijing Guoan’s Renato Augusto has been Tite’s first-choice no. 10 so far but hasn’t inspired much confidence that he can lead a team that is among the favourites to win the tournament for a sixth time.

With Neymar out injured, there’s even more room for experiment, and players like Willian, Philippe Coutinho and Fernan-dinho could be tested in more than one position. Here is a look at the main issues that Tite has to sort out ahead of the World Cup.

Once a weakness, the goalkeeping position is now one of Brazil’s main strengths. And there is little doubt that Roma’s Alisson will keep his role as the no. 1 for the tournament, after a stellar season that has seen him linked with a host of top clubs such as Real Madrid.

But Tite also has Manchester City’s Ederson at his disposal, and there’s not much to separate the two at the moment.

But one doubt remains: who will be the third goalkeeper in the squad? Corinthians’ Cassio had been considered the most likely choice until the squad list for these two friendlies was announced, with Tite giving Valencia’s Neto a first call-up instead.

Neto is currently the goalkeeper with most saves in the Spanish league. And there’s one common problem with all of those goalkeepers. Neither of them has any World Cup experience.

Tite has relied heavily on Augusto, viewing the midfielder has his voice and eyes on the pitch. But the player has had such an easy time in the Chinese league that he has a separate fitness programme to stay ready for Brazil games. And his recent sub-par performances have forced Tite to think of alternatives.

The most obvious change would be to push Coutinho back to Augusto’s position, which would also open space for Willian in the starting line-up. Besiktas’ Anderson Talisca and Juventus’ Douglas Costa could also be options to Willian. There is also a more defensive alternative with Fernandinho replacing Augusto, which could be useful once Brazil has the lead.

Lionel Messi joined up with his Argentina team mates as they trained at Manchester City ahead of their World Cup warm-up against Italy.

Messi’s side are based at the football academy of Premier League leaders City while they prepare for the friendly at Eastlands on Friday.

The Barcelona forward arrived to start working with the rest of the squad on Tuesday and was present at a training session open to media in the afternoon. Also present but not participating was City striker Sergio Aguero, who has been sidelined with a knee injury recently.

Another City player, defender Nicolas Otamendi, was involved along with the likes of Gonzalo Higuain, Angel Di Maria, Javier Mascherano and Marcos Rojo.